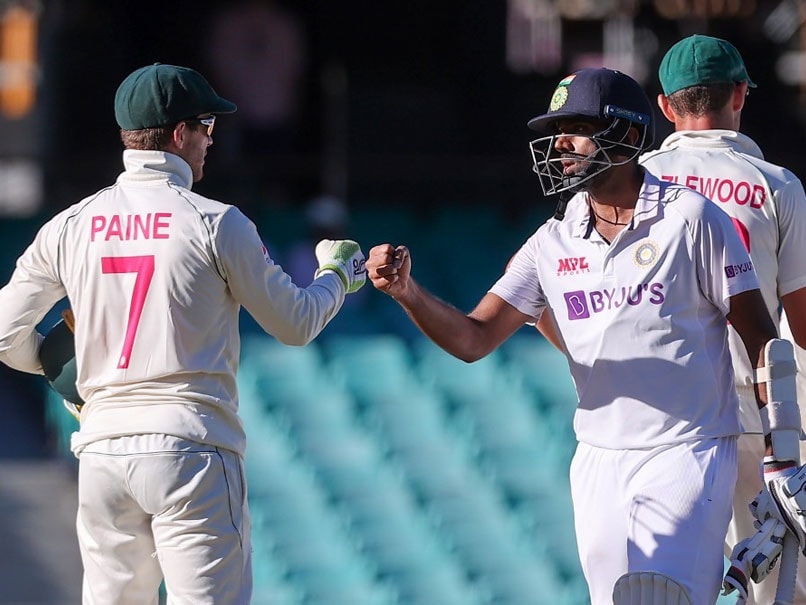 AUS vs IND: Ravichandran Ashwin and Tim Paine had got into a sledging match in the 3rd Test.© AFP


With India registering a famous 2-1 series win over Australia at The Gabba on Tuesday, India spinner Ravichandran Ashwin took to social media to engage in some banter with Australia captain Tim Paine, while thanking the hosts for some high-quality cricket during testing times. Tagging Tim Paine in his tweet, Ashwin said: “Good evening from Gabba!! I am sorry I couldn’t play here but thanks for hosting us and playing some hard cricket during these tough times. We will remember this series forever! @tdpaine36 @CricketAus.” Ashwin missed out at The Gabba as he complained of back spasms on the last day of the third Test. The bowling all-rounder had displayed amazing grit during the third Test at Sydney to help India walk away with a draw.

Good evening from Gabba!! I am sorry I couldn’t play here but thanks for hosting us and playing some hard cricket during these tough times. We will remember this series forever! @tdpaine36 @CricketAus

Paine’s efforts to throw Ravichandran Ashwin off-guard failed terribly on the final day of the third Test at the Sydney Cricket Ground as the off-spinner had the perfect comeback in store.

Unable to take wickets, Australia skipper Paine was trying his best to distract Ashwin and he was caught on stump mic as saying: “Can’t wait for you to reach the Gabba, Ash.”

To this, Ashwin immediately responded: “Can’t wait for you to come to India as well, that would be your last series.”

On Tuesday, Australia’s fortress — The Gabba — was finally breached. It took 32 years and two months, but the unthinkable was achieved as an injury-ravaged young Indian team beat Australia by three wickets against all odds in the final Test to take the series 2-1.

With critics pulling India down going into the series, Ashwin also had a tweet for them. He posted a photo of all the comments from the pundits on the left side and the photo of the Indian team with the trophy on the right side and wrote: “LHS ( not = ) RHS ! Yours happily India tour of OZ 2020/21 Humbled by all the love and support we have received over the last 4 weeks!”

The last time a visiting team came out triumphant from the Brisbane Cricket Ground was back in November 1988 when the mighty West Indian outfit under the leadership of Viv Richards thrashed Allan Border’s team by 9 wickets. What makes the feat even more commendable is how the Indians fought multiple injuries and mental fatigue – due to the bio-bubble restrictions — to register a historic win.