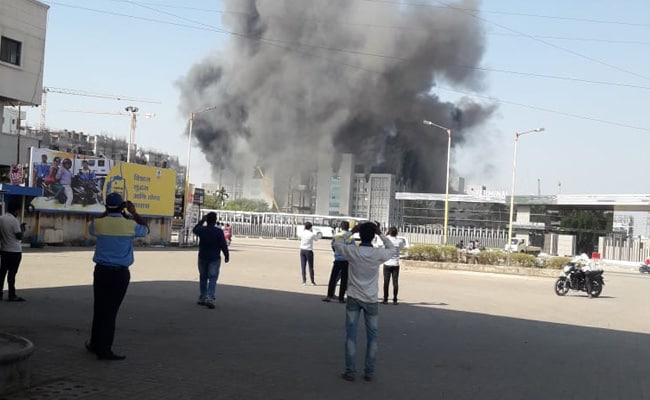 Visuals showed plumes of smoke billowing from the building at the SII.

Five people were found dead after a massive fire broke out today at vaccine-maker Serum Institute of India’s Pune facility, at a building that is under construction. It is unlikely to hit the production of Covishield, the coronavirus vaccine developed by the SII in partnership with the Oxford University and British-Swedish pharma firm AstraZeneca.

A few more trapped in the building were rescued.

“We have just received some distressing updates; upon further investigation we have learnt that there has unfortunately been some loss of life at the incident. We are deeply saddened and offer our deepest condolences to the family members of the departed,” Serum CEO Adar Poonawalla tweeted.

It took around three hours for firemen to bring the blaze under control. The fire is believed to have started because of an electrical fault. (See Pictures)

Mr Poonawalla had earlier told NDTV: “We are trying to rescue one or two people, that’s our only priority now. We will assess the situation later on the damage on all other counts.”

The five who died were contractual labourers, and Serum Institute has announced a compensation of Rs 25 lakh each to their families.

Prime Minister Narendra Modi tweeted to say he was anguished by the loss of lives.

Anguished by the loss of lives due to an unfortunate fire at the @SerumInstIndia. In this sad hour, my thoughts are with the families of those who lost their lives. I pray that those injured recover at the earliest.

The Serum Institute of India, the world’s largest vaccine maker, is spread over 100 acres in Pune.

Manjari, the complex where the fire broke out, is a few minutes’ drive from the facility where the Covid vaccines are produced. It is believed to be part of a Special Economic Zone (SEZ).

About eight or nine buildings are being constructed at the Manjari complex to deal with future pandemics and these are aimed at enhancing the SII’s manufacturing capability.

Visuals showed thick smoke rising from the building. The smoke made it difficult for firemen trying to bring out the trapped people.

Maharashtra Chief Minister Uddhav Thackeray’s office tweeted he was in touch with the Pune Municipal Commissioner for “complete on-ground updates”. Mr Thackeray had directed the state machinery to coordinate and ensure that the situation is under control, the statement read. A team of NDRF (National Disaster Response Force) is also at the site.

CM Uddhav Balasaheb Thackeray is in touch with the Pune Municipal Commissioner and is taking complete on-ground updates. He has directed the state machinery to coordinate and ensure that the situation is under control. https://t.co/NlcVtf33TG

There was some speculation that the fire could be linked to the construction activities at the site.

“Manjari facility is being built for any pandemic in future so vaccines can be developed in a short span of time. Packaging will also happen at the facility,” Umesh Shirsavkar, Deputy Director, SII, told NDTV earlier this month.

In November, Prime Minister Narendra Modi had visited the Serum Institute to review the development of coronavirus vaccine ahead of the rollout.

Serum Institute makes vaccines against polio, diphtheria, tetanus, hepatitis B, measles, mumps and rubella, which are exported to more than 170 countries. The company has spent nearly a billion dollars in recent years enlarging and improving the giant Pune campus.