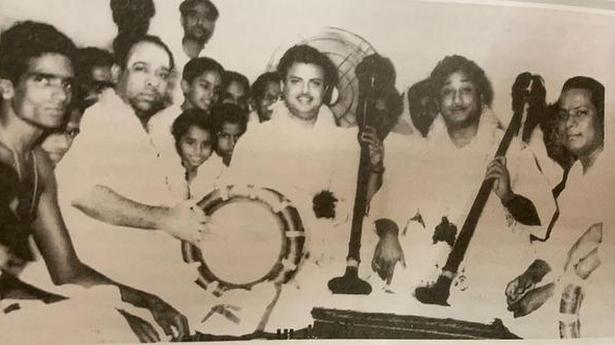 Released almost six decades ago on a Pongal Day, the film Konjum Salangai, pushed to instant fame nagaswaram player Karukurichi P. Arunachalam, whose birth centenary begins this year. His rendition, along with playback singer S. Janaki, of the song Singaravelane Deva is celebrated as an example of the remarkable synchrony achieved between nagaswaram and the human voice.

But the fact remains that both Arunachalam, a student of T.N. Rajarathinam Pillai, and Janaki did not record the song together. In fact, Arunachalam had played a different song and lyrics were rewritten later to suit the tune and was sung by Janaki.

“Karukurichi Arunachalam actually rendered Manthiramavathu Neeru, the Thevaram song to the tune set by T.A. Sambandamurthy Achari. He also played the swaras and it was recorded first by music director S.V. Subbaiah Naidu,” says Vamanan, a historian of Tamil film music. The film was released on January 14, 1962.

The thavil was played by Perumpallam P. Venkatesan, who had accompanied Arunachalam for 12 years.

When the film crew wanted to create a duet scene, lyricist Ku.Ma. Balasubramanian penned a song to synchronise with the already rendered nagaswaram score.

But the music director was not able to find a voice that could match the high pitch of the nagaswaram. Many singers opted out. It was singer P. Leela who suggested that Janaki could do justice to the song.

“It will be surprising to know that we rendered the songs separately. I used a headphone and sang the song in tune with the sruthi and mellifluousnesses of nagaswaram. People celebrate the duet, but as the artists of the song, we had not met each other,” Janaki had said in an interview to Tamil magazine Ananda Vikatan in 1964, a copy of which is obtained by writer Lalitharam.

In the interview done after Arunachalam’s demise in 1964, Janaki had said though she had sung a lot of other songs, it was Singaravelane Deva secured for her unprecedented fame and recognition.

“I first met him in Shanmugananda Hall in Bombay almost one and half years after the song was recorded. It was also our last meeting. When I told him of the recognition he said it was Lord Muruga’s grace. He also invited me and my husband to Tiruchendur temple. But we did not get a chance to visit,” she had recalled.