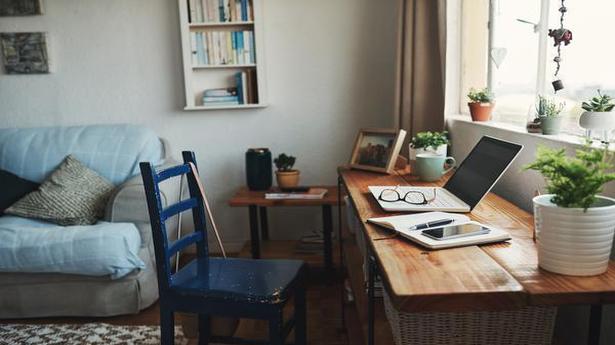 This time, last year, we were lounging in bed, our laptops perched on a messy pile of pillows. The work desk has come a long way since then

It is difficult to sum up what working through March 2020 was like. From a normal day at the office, we were scurrying home with our laptops to a sudden, unfamiliar isolation. In that haze of confusion and uncertainty, but tinged with optimism, we looked forward to resuming normal life, eventually…

We now know that the challenges March 2020 went through were far beyond these emotional stressors. Sore necks and tired eyes — markers of an unexpected and seemingly unending work-from-home shift — can still bring back fresh memories from when we crouched on our beds with laptops propped up against a stack of pillows; a mug of black coffee in hand. The first few weeks were glorious; no morning traffic, no fixed hours, no dress code…the only things that remained fixed were deadlines and an endeavour to work while reclining on the couch or in bed.

One year later, the work desk has come a long way. As weeks and months went by, the humble laptop (a constant companion in shared misery) graduated from the bed to a wobbly table reclaimed from a forgotten corner, to today’s painstakingly assembled workstation .

Speaking for myself, after falling face down on the keyboard a couple of times when crouched in bed, I decided it was time for an upgrade. Firmly telling myself that I am an adult and thus capable of drawing a line between my professional and personal life, I began to trawl the Internet for ideas, peppered constantly by insistent Instagram advertisements. By the end of April, I added 2020’s favourite accessories, a bottle of sanitiser and multiple charging devices, and settled in for the long haul.

Pinterest threw up some too-good-to-be-true (and also, expensive) workstation ideas. Fairy lights seemed to be the rage. While some artist friends surrounded themselves with framed and even incomplete canvases resulting in a burst of colour, others invested in easier options like pull-out desks that are attached to cots. I repurposed an old computer table that was locked away in the store room. Even as my software engineer-brother in the next room was flaunting the WFH benefits (which included a brand new chair) his company provided, I pulled out pillows and cushions to bolster my wooden chair, with a frown.

When Zoom meetings became common place, the work desk had to multi-task — not only holding my laptop, sanitiser, chargers and coffee mug, but also setting me up against a formal, ideally book-laden backdrop. After all, the Zoom screen had by then evolved as a window to one’s personal life. Across the world, colleagues, clients and family tried to outdo one another by curating cross-sections of their homes that the screen captured.

Dragging the table around the house in a panic as the next Zoom meeting loomed, in pyjamas and a formal shirt, we initially settled for the least embarrassing view, swivelling the intrusive camera away from unmade beds, messy cupboards and chaotic dining tables. Slowly, we learned to strategically add pots of vibrant succulents (because you know you can’t kill them, even if you try).

Then the Instagram Lives began, broadcasting our rooms to hundreds of strangers, and it was time to up the game again. This is when the contemporary art — from a friend or a favourite local artist — began to appear. It had to be strategically positioned, of course, to casually appear on screen like an afterthought. With every performance migrating online — stand-up comedy shows, plays, concerts, you name it — we even donned the garb of decent, screen-friendly spectators, with an impressive knowledge of flattering camera angles.

As we start returning to our respective cubicles, albeit cautiously, we will perhaps miss the familiarity that the work-from-home desks brought to a hectic weekday: be it its proximity to one’s bed (and mid-day snacks) or its ability to happily fuse together my personal and professional life. A year of peering into each others’ homes, virtually meetings pets and thinking long and hard about the next online team-building activity, has only brought co-workers together, world over.

But through it all, the work desk remained an anchor — a glimpse into normality — we never thought we would need in March 2020. One year later, in March 2021, we cannot do without it.