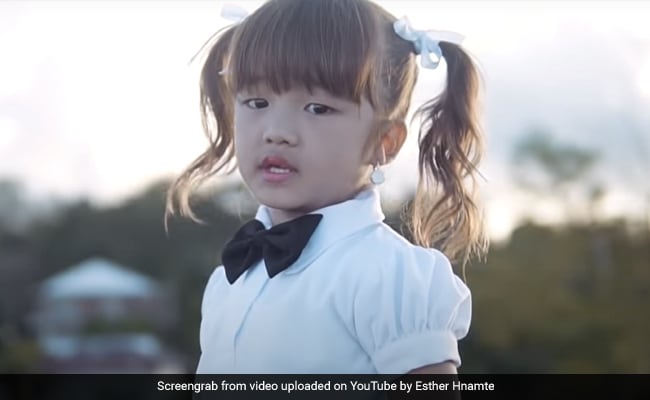 The little girl’s YouTube channel has over 73,000 subscribers and the video uploaded on October 25 has so far got over five lakh views.

“Dear brothers and sisters, be proud that you are an Indian. It is a land of love, care and affection. So lovely the variety in languages, cultures, lifestyle… Let us stand together to be good sons and daughters for our motherland in spite of the diversities,” the video description says.

PM Modi retweeted the video shared by Zoramthanga. “Adorable and admirable! Proud of Esther Hnamte for this rendition,” the Prime Minister said of Ms Hnamte’s version of the national song.

Adorable and admirable! Proud of Esther Hnamte for this rendition. https://t.co/wQjiK3NOY0

Ms Hnamte’s video has several professional shots taken in different locations, from the mountains to the hill towns in the northeast state. There are also drone shots of picturesque fields and forest roads.

In a white shirt and black skirt, with a ribbon pinned to the collar, the four-year-old carries the music video with grace. Her version has been improvised with electric guitars and soft rock elements, and it has received a positive response from listeners as well as viewers of the video.

Other videos in Ms Hnamte’s YouTube channel shows her practising the song at her home, complete with a crew seen trying out instruments.

Musician AR Rahman had sung his blockbuster “Vande Mataram” in a more contemporary style in his studio album of the same name in 1997, which received a good response at that time, with the chorus “Maa Tujhe Salaam” becoming instantly recognisable among listeners.