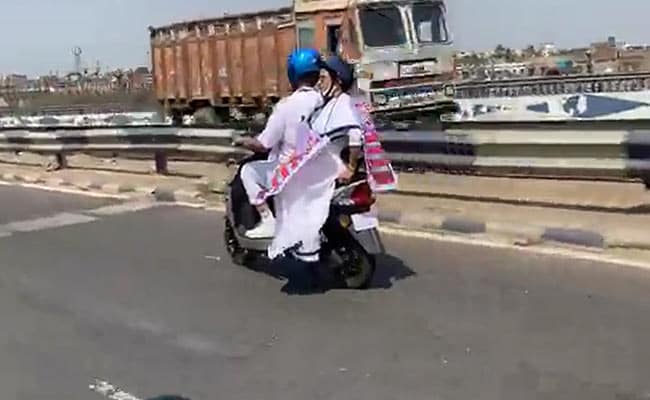 The 5-kilometre ride passed over the Hooghly river bridge in Kolkata.

Mamata Banerjee arrived at work on an electric scooter today. The West Bengal Chief Minister, known for her modest “Santro” image, took things a notch up – or, perhaps, down – to drive home the point on spiralling fuel prices. In the run up to the state Assembly polls scheduled for April-May, today’s ride is an indication that the Trinamool Congress head isn’t going to let go off any opportunity to attack the BJP which has relentlessly badgered her government over the past many months.

Ms Bannerjee’s ride today comes days after RJD leader Tejashwi Yadav, on Monday, drove a tractor to reach the Bihar assembly. He was expressing solidarity with those opposing three new farm laws and also protesting against the spike in prices of petrol, diesel, and cooking gas.

Urban Development and Municipal Affairs Minister Firhad Hakim rode the battery-powered scooter with her riding pillion. A considerable stretch of the five-kilometre trip from Kolkata’s Hazra More locality to the state secretariat in Nabanna passed over the Second Hooghly river bridge or Vidyasagar Setu. The entire ride was telecast through Facebook Live. Later the Chief Minister addressed the media, seated on the e-scooter or battery-operated scooter.

“Kerosene is not available. One crore people in Bengal use it. Petrol-diesel (prices are) up. Gas up…even last night. That’s why I decided to take the scooter to work,” she said.

“Modi is selling the country. This government is anti-people, anti-women, anti-farmer, and anti-young generation. We want this government to go,” she said.

In her trademark white cotton sari, Ms Banerjee also wore a helmet and mask during the ride. Her bike was also followed by a group of others.

However, what stood apart was an apron-like poster with the picture of an LPG cylinder, superscribed with terms like “petrol price hike” and “diesel price hike” under the heading “What is in your mouth”.
Fuel prices have increased considerably across the country over the past many weeks. In Kolkata, for instance, petrol costs Rs 91.12 and a cylinder of cooking gas comes at a reported Rs 820.25, rising by Rs 100 this month.

“When elections come, they say they will give free gas. But that gas is so much gas…like a full hot air balloon. It is not the original gas, not LPG. It is gas that comes from lies,” Ms Banerjee said.

The opposition parties, however, dubbed her protest an “election stunt”.

“The CM is resorting to novel theatrics ahead of the elections but the state government is not doing its bit to reduce fuel prices,” BJP leader Jai Prakash Majumder said, according to a PTI report.

The Congress reflected a similar sentiment. The Left Front’s Sujan Chakraborty said, “Banerjee had ridden pillion on Chhatradhar Mahato’s motorcycle in the Jangalmahal region before coming to power in the state but later people of that region witnessed the TMC’s intimidation and terror.”

The state assembly polls are likely to be held in April-May and the BJP has gathered remarkable momentum in the run up, investing money, time, and energy. The ruling Trinamool has, meanwhile, tried to dub it an “outsider” party that doesn’t understand West Bengal. The poll campaign, till now, has been largely vitriolic.

Amid this, the battery-charged scooter ride today also seems like an attempt to reinforce her Hawaii-slipper-wearing everyday-woman image among voters.

“Excellent”: PM Shares Video Of “Over 3000 Blackbucks” Crossing A Road