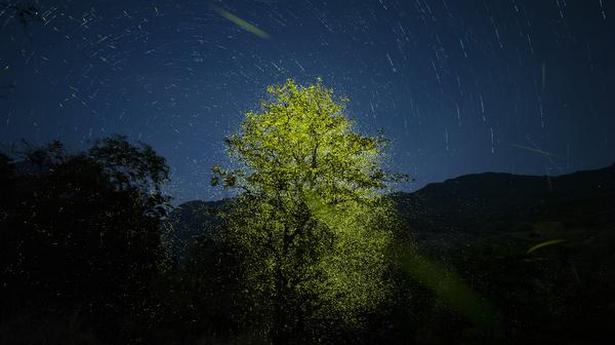 In June 2019, standing by the side of an old, indigenous plum tree, amid the deep greenery of Bhandardara, Maharashtra, Aishwarya Sridhar stood stock-still, her camera focussed on the hypnotic illumination unfolding before her: Indian fireflies, by the thousands, moving about harmoniously whilst laying forth their magnificent bioluminescence. This moment, forever etched in the young shutterbug’s memory, would take her to newer heights.

What she shot that night in June — the photo titled ‘Lights of Passion’ — fetched Aishwarya the ‘Highly Commended’ award at Wildlife Photographer of the Year Awards under the ‘Behaviour-Invertebrates’ category. Now in its 56th year, the annual international wildlife photography competition is London’s Natural History Museum’s showcase for the world’s best nature photography and is open to photographers of all ages.

Thrilled as she is, the 23-year-old is a little upset that she cannot be in person at the Natural History Museum, London, to see her photograph on display. “I have asked a couple of friends in London to visit the museum and take photos of the display for me,” she says, excitedly.

Aishwarya’s interest in fireflies was lit when she came across a newspaper article that spoke of its abundant presence in the Western Ghats. It helped that fireflies, in small numbers, would often fly past the balcony of her home in Panvel, Mumbai. Her research led her to Bhandardara. “Clicking fireflies when the moon is bright is tough because their bioluminescence goes dull,” she says. So, the best time to shoot was in the window before sunrise, just as the moon almost set.

With help from locals who guided her to the spot in the jungle, Aishwarya trekked for two-and-a-half-hours in pitch darkness, braving nocturnal species on the prowl. “I spotted a Myrobalan tree which was completely covered in fireflies. It was the first time I had seen fireflies in such huge numbers. I felt like I was standing in the magical world of Harry Potter,” she adds.

She initially took snaps using the longer 100-400mm lens, but was not satisfied with the results. “I was missing out on their flashes because the whole tree wasn’t in the frame. It was tough to focus on the fireflies, and using a torch would have disturbed them. I had to rely on my eyesight to get a precisive shot of the tree,” she says.

The skies above her were scattered with twinkling stars, and so she decided to create a star trail to frame the fireflies. Using her Canon EOS-1D X Mark II camera and Canon EF16-35mm f/2.8 L II USM lens — at a focal length of 24mm, shutter speed of 24 seconds, f/2.8 and ISO 1000, she snapped 27 consecutive photos, which she later stitched together, post-production. “In other photographs [of fireflies], I didn’t see the juxtaposition of fireflies with the night sky, so that propelled my creative direction,” she says.

Aishwarya — who is also part of the Canon ambassador program as a Canon EOS Explorer — notes that fireflies in India are not photographed as often as is assumed. “Indian fireflies are pretty different from others in the species with respect to bioluminescence. In other countries, you find fireflies make the grasslands their habitat. Here, they make their home on trees,” she says, adding why she is endlessly fascinated with them: “They are stunning ambassadors of Earth’s natural magic. I hope this photograph gets people wanting to explore more about fireflies.”

Update: This is an updated and corrected version of the story that appeared in print on October 22, 2020, in Chennai. We regret the error, and ask readers to refer to the above story for all factual information pertaining to Aishwarya Sridhar and her win at NHM London’s Wildlife Photographer of the Year.