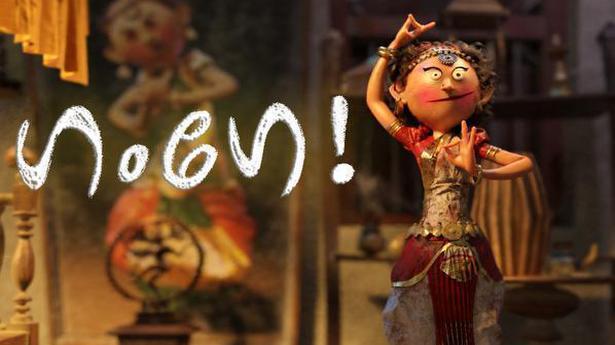 “I am still on cloud nine!” Aju Mohan cannot stop gushing ever since his humorous take on the scene from Malayalam classic Manichitrathazhu has gone viral. The animator’s 18-second video, Gangeeeeeeee!! (Tribute to Manichitrathazhu) has clocked over one lakh views (and counting) on his Instagram page, @gebonions.

In what he calls “a tribute to Manichitrathazhu”, Aju has given a comic twist to the scene where actor Shobana dances to the song ‘Oru Murai Vanthu Parthaya’, interchanging between her characters, Ganga, and Nagavalli, the dancer. As she dances, Aju plants the twist in the tale. The floor gives away and she falls down! That’s when you hear “Gangeee…”, the famous dialogue in the movie by Nakulan (played by Suresh Gopi), which brings back Ganga from her ‘possessed’ state.

“When I posted it on my Instagram page on Tuesday night (February 16), I was a bit apprehensive about how people were going to take it. But it was overwhelming to read all the comments the next day. It was like a dream,” Aju writes to us over an email from Montreal, Canada, where he is working with a VFX company, Framestore.

Aju says that the idea just “popped up” one day. “Lucky, I guess! I was 11 when I saw this movie and it scared me a lot. Even now certain scenes give me the creeps. So I thought, how do I turn a horror scene into a comedy. The best way to do it was by slapstick,” says the 38-year-old, a native of Thiruvananthapuram. So, according to him, what might have happened to Ganga after the fall? “I believe she is cured with that fall and woke up as herself with a very sore back!”

It took Aju nearly a month to finish the video. The work was done in Blender, a free open source software. “I am a character animator and I am not proficient in Blender. So I had to refer to a lot of YouTube tutorials to make it work. Since I had to do everything myself and I am not an expert in departments such as lighting, modelling, texturing, cloth simulation (giving a realistic touch to a character’s outfits) etc… I had to go through several trial and error sessions to get the desired visual quality,” he explains.

The mechanical engineer (“just on paper, I have absolutely no idea of how to fix even a toy car”) did a course in animation from Toonz Animation in Thiruvananthapuram and has been working in the animation industry for the last 14 years. Previously employed with Dreamworks India in Bengaluru he had been an animator on projects such as Kung Fu Panda 3, Trolls, Penguins of Madagascar, Deadpool 2 and Mulan.

He has also created an animated series titled The Gebonions. “The project is close to my heart. It is about two tiny aliens chasing another small alien, an idea inspired by Tom and Jerry. After 10 episodes I took a break and hope to start it again,” says Aju.