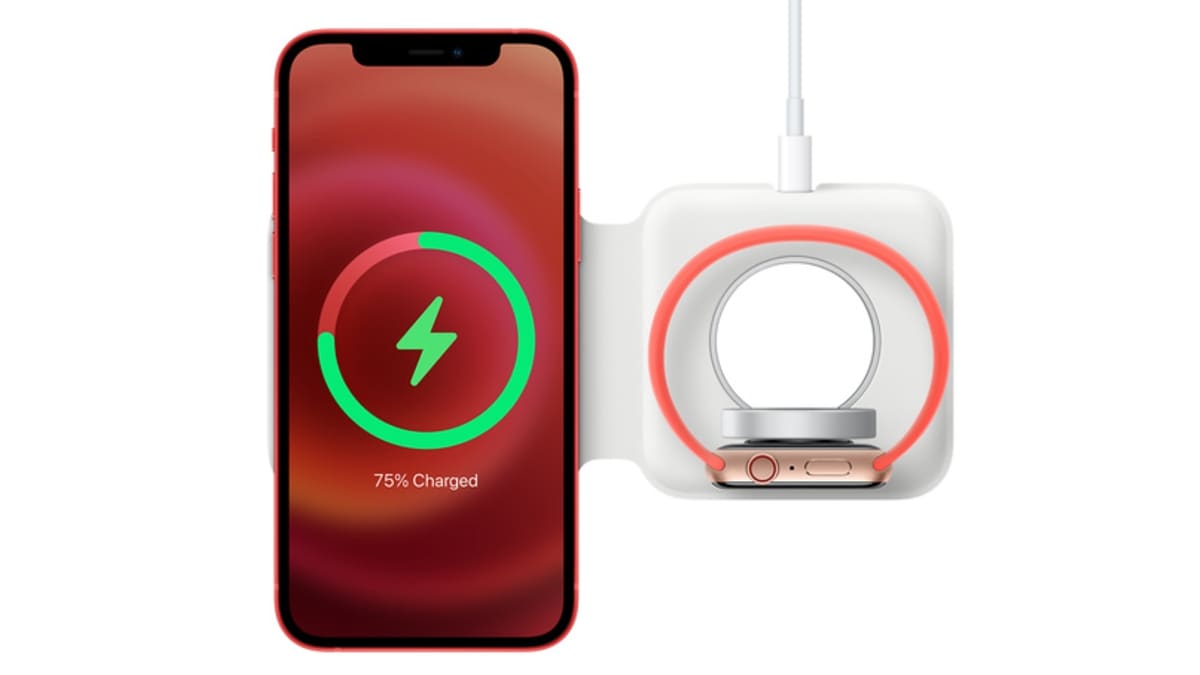 Apple’s upcoming MagSafe Duo Charger, which is designed to let users charge their iPhone and Apple Watch together, is found to be unable to charge compatible iPhone 12 models at the full 15 watts. This is unlike the regular MagSafe Charger that can deliver up to 15W wireless charging. Separately, Apple seems to have granted a patent for a MagSafe cooling case that could let the iPhone work faster by allowing the processor to run at a higher temperature. The MagSafe technology was introduced on MacBooks back in 2006, but it only arrived for the iPhone family with the iPhone 12 series in October this year.

As noticed by Bloomberg’s Mark Gurman, Apple has updated the product description of the MagSafe Duo Charger on its website to underline that it doesn’t support up to 15W wireless charging and can deliver up to 11W using a 20W USB-C Power Adapter.

In case a user wants a faster charging experience, the Apple site says that a maximum of 14 watts could be extracted through the MagSafe Duo Charger but only when it is connected to a 27W or higher USB-C adapter.

Apple initially didn’t provide any clarity on the charging wattage users would get through the MagSafe Duo Charger. It instead mentioned that it could work with a 20W USB-C adapter. Thus, it was presumed that just like the regular MagSafe Charger that offers up to 15W charging through a 20W adapter, the premium offering would also deliver a similar experience.

MagSafe on the iPhone is so far limited to a handful of accessories. However, Apple may have some plans to expand the portfolio. The patent granted by the US Patent and Trademark Office (USPTO) on Tuesday, as spotted by AppleInsider, suggests that the development of a new smart case could allow the iPhone to work faster by speeding up the processor.

The abstract of the patent hints that the new MagSafe case could generate a magnetic field that once detected by the iPhone using a hall sensor could allow the hardware to boost the processing power and run at a higher temperature.

Apple MagSafe cooling case could enable the iPhone to boost the processing power and run at a higher temperature
Photo Credit: USPTO

Apple is also likely to use NFC and an RFID tag to detect the presence of the case on a compatible iPhone to provide the new experience.

The patent was filed on February 20, 2019, though it received an approval just earlier this week. However, this doesn’t guarantee any launch plans as Apple — just like other tech companies — often file patents for concepts to understand what could be built next.

Are iPhone 12 mini, HomePod mini the Perfect Apple Devices for India? We discussed this on Orbital, our weekly technology podcast, which you can subscribe to via Apple Podcasts, Google Podcasts, or RSS, download the episode, or just hit the play button below.

PlayStation 5, PS5 Digital Edition Are Back in Stock in India This Week

How to Book COVID-19 Vaccine via Paytm App