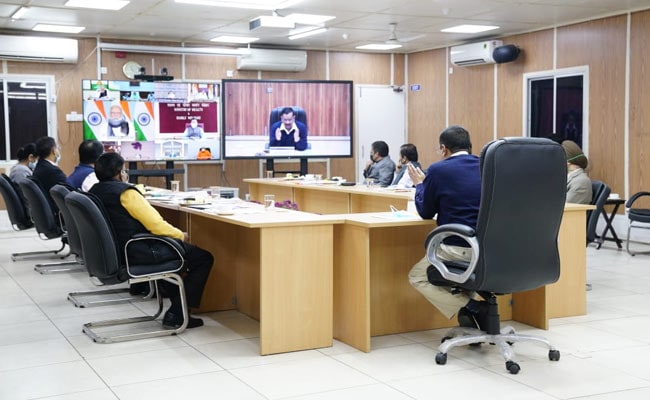 Coronavirus cases in Delhi have been decreasing since hitting an all-time high of 8,593 cases on November 10, Delhi Chief Minister Arvind Kejriwal said at a meeting called by Prime Minister Narendra Modi on Tuesday.

PM Modi chaired a virtual meeting with the chief ministers of the eight worst Covid-hit states – Maharashtra, Kerala, West Bengal, Gujarat, Chhattisgarh, Rajasthan, Delhi and Haryana – to review the coronavirus situation, discuss the cause for surge and counter-measures planned to stem virus growth.

“Delhi saw a peak of 8,600 cases on November 10 during the third wave. Since then cases and positivity rate have been on a steady decline. We hope this trend continues,” Mr Kejriwal said a day after the city recorded 121 deaths with 4,454 fresh infections as one-day testing dropped to about 37,000 samples in the last 24 hours.

The chief minister said third wave was “severe” and it has seen deaths and hospitalisations rise sharply since the surge started five weeks ago.

Mr Kejriwal attributed the rise in Covid-linked deaths – that shot past 100-mark six times in 12 days – to air pollution.

“The high severity of third wave is due to many factors. Pollution is an important factor,” Mr Kejriwal said seeking the Prime Minister’s intervention to rid the city of the annual pollution spike caused by stubble, or “parali”, burning in neighbouring states.

Weeks before paddy stubble burning started this year, experts had warned that air pollution – besides festive rush in markets – could increase coronavirus cases and even cause more deaths as COVID-19 affects lungs.

Despite the warnings, state governments failed to check the practice with farm fires increasing four-fold.

Stubble burning contributed significantly to air pollution in Delhi, peaking to 44 per cent on November 1 – the highest this year – showed data from the Ministry of Earth Sciences’ air quality monitor SAFAR.

As a low-cost, simple solution to the problem, Mr Kejriwal once again urged the central government to promote the indigenously developed bio-decomposer that was tested successfully in farms across villages in Delhi.

Delhi has added more than one lakh cases since November 1. The surge left alarmingly few ICU beds with ventilators in city’s private and government hospitals till the High Court allowed the state to reserve 80 per cent beds in ICUs of 33 private hospitals for Covid patients.

Though Delhi continues to record the highest daily cases in India amid the third wave, its weekly average shows a gradual dip in rate of increase, especially since testing has been increased with the Central government’s intervention.

According to government data, the city saw an average of 6,321 cases in the last week – highest among the 8 worst-hit states. It also recorded an average of 111 deaths over this period – also the highest with Maharashtra a close second with 93 average weekly deaths.

The daily positivity rate has come down from the earlier 15 per cent to about 11 per cent, but it is still at least three times higher than the national daily average of 3.5 per cent.