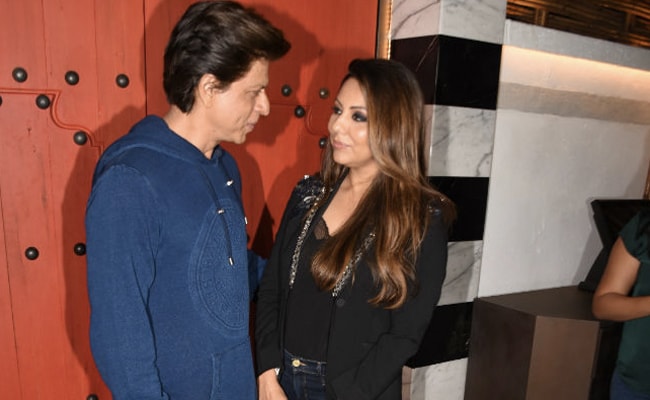 As a part of Shah Rukh Khan’s  ‘Ask SRK’ session on Tuesday, a fan asked the actor what he gifted his wife and film produced Gauri Khan on their 29th wedding anniversary (which the couple celebrated on October 25). “29 years of SRK-Gauri… Kya gift diya Gauri Ma’am ko?” asked a fan on Twitter. SRK gave the most adorable reply. Referring to Gauri Khan as his “biggest gift,” the actor wrote in his tweet: “What gift can I give to the biggest gift in my life?” Shah Rukh Khan married Gauri in the year 1991, just a year before he made his Bollywood debut with the 1992 film Deewana. The star couple are parents to Aryan, 22 (their eldest child), Suhana (20) and 7-year-old AbRam. Both Aryan and Suhana are pursuing their higher studies abroad while AbRam stays with his parents in Mumbai.

What gift can I give to the biggest gift in my life? https://t.co/MPV5ZNjqb8

Gauri Khan is an interior decorator and she owns the plush Gauri Khan Designs in Mumbai. She has given makeovers to several suburban Mumbai restaurants and celebrity homes over the years. She has redecorated homes for several Bollywood A-listers such as Alia Bhatt, Varun Dhawan, Ranbir Kapoor and Karan Johar among others. She has designed restaurants like Arth and Sanchos. Other than that, she is a film producer and will soon make her debut as an author with a book titled My Life In Design.

Shah Rukh Khan is in Dubai with his family for the current season of the Indian Premier League (IPL), where he co-owns the team Kolkata Knight Riders. The actor was last seen in the 2018 film Zero, co-starring Anushka Sharma and Katrina Kaif. The actor produced several projects last year, which include Netflix’s Bard Of Blood, Amitabh Bachchan and Taapsee Pannu’s Badla and Kaamyaab. He will also produce the film Bob Biswas, starring Abhishek Bachchan.