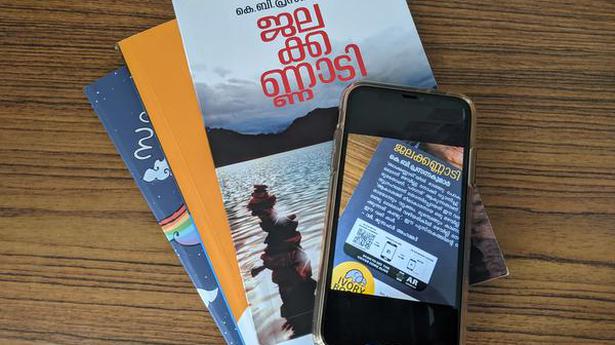 The cover of Malayalam travelogue Jalakannadi, published by Thrissur-based Ivory Books, has a photograph of a lake flanked by mountains. Scan the QR code on the book and a few seconds later the photograph comes alive, with ripples of water shimmering on the surface. As is the case with the covers of Pandorayude Petti and Samayaalbhuthangal. This is the first time Augmented Reality (AR) has been used for covers of Malayalam books.

A desire to think out of the box led publisher Praveen Vaisakhan to give AR a shot. “The potential of technology is immense, we just need to think of ways of using it. Take holographic projections for example…3D images change an experience completely. Imagine seeing holographic projections of a favourite author!” he says. A fledgling publishing business, Ivory Books, gave him the space to try out his idea.

“The book cover started out as another idea…I was thinking of books with AR-embedded pictures. There are AR-embedded textbooks, linked to an app,” he says. Based on the conversations with his son, an art director at an ad agency, they veered toward trying AR book covers.

Each of the books has a QR code, which when scanned leads to Facebook or Instagram. When you place the camera on the cover, a filter appears (like on Instagram) and the picture then comes alive. For the cover of Pandorayude Petti, they used the video of a butterfly to give the filter a realistic feel with butterflies fluttering on it. “The technology now costs ₹10,000 to ₹15,000 to design a filter, but if more people started using the technology, for instance for book covers, it would get accessible and perhaps, cheaper,” says Praveen.

Having run a design agency earlier in his career, it was another reason for him to think about presentation. Praveen now runs a boutique book shop, Bookish Store, in Thrissur, which also has a dedicated space to showcase art. His personal collection of books on art is on display here for reference. He says his passion for books led him to opening the store three months ago, in the midst of the pandemic.

“I would be one of the few people who started a business venture during the pandemic. The gallery space used to be a financial institution. The way I see it, art found a space where money (the financial institution) lost its, reiterating the meaninglessness of money when calamity strikes,” he adds.