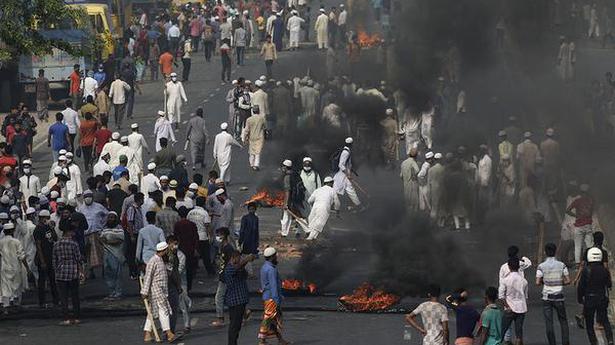 A teenager has died and at least a dozen people were injured during clashes between police and demonstrators in Bangladesh on Sunday, officials and reports said, in the third day of Islamist protests against the visit of Prime Minister Narendra Modi.

The protesters — mostly from the hardline Islamist group Hefazat-e-Islam — were angry at the visit of Prime Minister Narendra Modi as Bangladesh marked 50 years of independence, accusing him of stoking communal violence against Muslims in India.

Five people died on Friday, and another six the next day, after police shot at demonstrators in several major districts across the Muslim-majority nation of 168 million people.

The 19-year-old boy died in a hospital in the eastern district of Brahmanbaria after being caught up in clashes in the rural town of Sarail on Sunday, Shawkat Hossain, a doctor at the state-run centre, said.

The cause of death was not yet known, he added.

Mr. Mridul said about 3,000 Hefazat supporters and Muslim villagers had taken part in the Sarail protests.

Bangladesh’s Home Minister Asaduzzaman Khan called for the protests to be halted.

“Our security forces are observing this with patience,” Mr. Khan told reporters on Sunday.

“We think if this is not stopped, we’ll take necessary actions.”