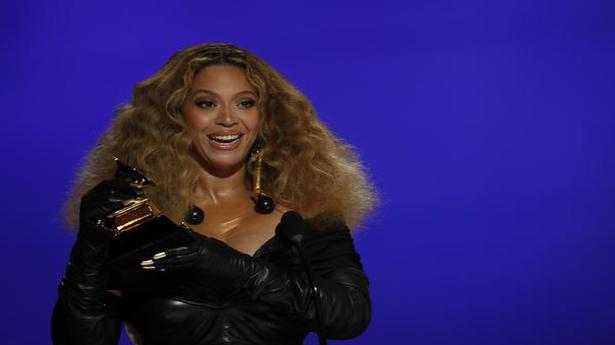 She secured the record after winning Best R&B Performance for her hit Black Parade, a single celebrating Black culture and activism.

Beyonce made Grammys history March 15 by becoming the winningest woman in the history of the music industry’s top awards gala, and its most decorated singer with 28 career wins.

She secured the record after winning Best R&B Performance for her hit Black Parade, a single celebrating Black culture and activism that dropped in the wake of mass protests ignited by the death of George Floyd in police custody in the summer of 2020.

“I am so honoured. I’m so excited. Thank you,” said the singer, who made a surprise showing at the gala she has skipped for the past several years, wearing a black leather mini dress.

“As an artist, I believe it’s my job and all of our jobs to reflect the times. And it’s been such a difficult time,” Beyonce said, with her rapper husband Jay-Z looking on.

“So I wanted to uplift, encourage, celebrate all of the beautiful Black queens and kings that continue to inspire me and inspire the whole world.”

“It’s such a magical night, thank you so much,” Beyonce said, adding her gratitude to her children — after the eldest, Blue Ivy, won her first Grammy for her appearance in the music video “Brown Skin Girl.”

“I’m so honorued to be your mommy, all of your mommies. Y’all are my babies. And I’m so proud of y’all. I love you so much, my rock,” she said, nodding to Jay-Z.

It is a major moment for the 39-year-old Beyonce, whose repeated snubs in top award categories have raised eyebrows and stirred controversy.

She is the most nominated female artist in Grammys history with 79, tied with Paul McCartney as the second most nominated act and only one behind husband Jay-Z and industry legend Quincy Jones.

Prior to 2021, the megastar boasted 24 Grammy wins to her name — but notoriously lost Album of the Year in 2017 to British balladeer Adele, a controversial snub often cited as an example of the Recording Academy’s diversity issues.

Critics praised Black Parade for Beyonce’s strong vocals as well as its lyrics that simultaneously condemn racism, issue a call for activism and pay homage to Black culture.