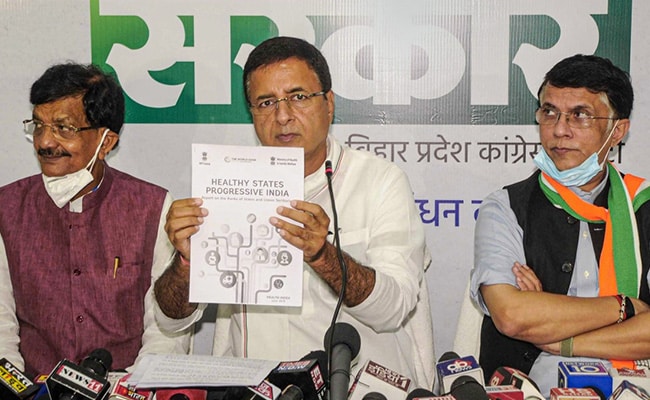 The Congress held the Bihar government responsible for Munger firing during a Durga Puja event.

Bihar Congress leaders met Governor Phagu Chauhan today and demanded dismissal of the Nitish Kumar-led government amid the ongoing state assembly polls, holding it responsible for the firing in Munger during a Durga Puja event in which one person was killed.

“We demanded the dismissal of the Nitish Kumar government… We told the governor that the Munger incident took place at the instance of JD(U)-BJP government of (Nitish) Kumar and his deputy Sushil Modi,” Congress national general secretary Randeep Singh Surjewala said after submitting the memorandum.

“It was the BJP-JD(U) government which ordered the latchicharge and firing on the innocent devotees of Goddess Durga in which one person was killed while eight others were injured during the immersion of an idol on Monday night,” he said.

The memorandum said that Chief Minister Nitish Kumar instead of ensuring justice for the people of Munger actually protected the superintendent of police and district magistrate who are responsible for the incident, he said.

The government, he alleged, is protecting the two officials as the Munger superintendent of police is the daughter of one of the senior most JD(U) leaders (Rajya Sabha member RCP Singh) while the collector is close to both Nitish Kumar and Sushil Modi.

The Nitish Kumar and Sushil Modi duo are the “real culprits” of the “brutal and ruthless” firing and lathicharge which took place with their consent, Mr Surjewala alleged.

The delegation also demanded Rs 50 lakh compensation for the family of Anurag Kumar, the person who died in the firing in Munger and institution of a case after suspending the erring officials in this regard, he said.

The governor, despite being unwell, gave the Congress leaders a patient hearing and assured them of “necessary action”, Mr Surjewala said.

The Congress leader claimed that the CISF email which has come to the public domain has admitted that the force and police had resorted to firing at Munger.

“The email belies the Nitish Kumar governments version that police did not fire on the people,” he said.

In the email the CISF DIG wrote to the force’s Ranchi IG that local police first fired in the air and later a CISF constable also fired 13 rounds in self defence after sensing that the situation may go out of control.

The Election Commission on Thursday removed the Munger district magistrate and superintendent of police and ordered an inquiry into the firing and stone pelting during the immersion of an idol of Goddess Durga on Monday.

It asked the Magadh divisional commissionern to complete the probe within a week.

The RJD-led Grand Alliance had strongly criticised the police firing likening the district police with General Dyer of the infamous Jallianwala Bagh massacre of 1919.

The assembly polls are underway in Bihar and Nitish Kumar, who is the chief ministerial candidate of the ruling NDA, is seeking to be returned to power for the fourth consecutive time.

The first phase of the state assembly polls is over and the next two phases of the 243-seat House are slated to be held on November 3 and 7.