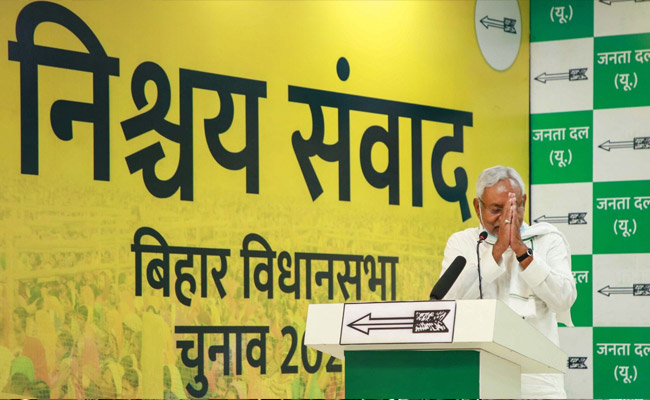 The BJP video campaign has no mention of Nitish Kumar.

In Bihar, as voting for the first round of state elections draws close, signs are piling up that the BJP is distancing itself from Nitish Kumar – ones that stand apart from its supposed backing of Chirag Paswan’s rebellion against the Chief Minister’s leadership. Even Prime Minister Narendra Modi, in his rallies in the state last week, sought votes for the NDA and made only a cursory mention of Nitish Kumar towards the end of his speech.

The three-phase polls begin on Wednesday.

Over the last weeks, the two allies have been holding parallel campaigns with practically no overlap. Barring Deputy Chief Minister Sushil Modi and Union minister Ravishankar Prasad, no prominent BJP leader has made an appearance at the rallies of Nitish Kumar or his Janata Dal United.

Now Sushil Modi has contracted coronavirus, which has left Mr Kumar to fend for himself.

Even the BJP video campaign has no mention of Nitish Kumar. BJP hoardings across the state portray PM Modi. Similarly, the Janata Dal United campaign also talks only about Nitish Kumar.

Leaders of the BJP have no explanation why only posters and cut-outs of Prime Minister Narendra Modi are highly visible at their rallies, and none of Nitish Kumar, though he was declared to be the face of the NDA campaign by both PM Modi and Amit Shah.

The Prime Minister, in his three speeches in the state last week, barely mentioned Nitish Kumar.

Even in his first speech at Sasaram, he sought votes for an NDA government and at the very end, asked the crowd to vote for Nitish Kumar, making it clear that the chemistry is missing.

Off the record, BJP leaders say all this is deliberate as the party now has feedback that resentment against Nitish Kumar is growing across all segments.

Voters are particularly peeved at Mr Kumar’s handling of the stranded migrant labourers from the state during the lockdown and his alleged indifference to the woes of the common people – issues that are being used in spades by opposition Rashtriya Janata Dal’s Tejashwi Yadav.

BJP leaders also say supporters of their party do not want another term for Nitish Kumar despite his clean image on account of prohibition and corruption across all sectors – issues flagged by Chirag Paswan while campaigning for his party’s solo contest.

The BJP is clear that unless votes are sought in the name of PM Modi, the NDA has no chance. This far, it has publicly declared that Chirag Paswan — who is contesting 135 seats — will not be part of the NDA in this election, even though Paswan Junior has declared his loyalty to the BJP.

Feedback suggests that the popularity graph of the Prime Minister is still intact in the state.

Mr Kumar’s JDU, meanwhile, is flooded with feedback of local BJP leaders’ indifference towards his candidates. His supporters concede this time there is no buzz about his “Seven Nischay”, unlike the first time in 2015.

Instead, the party has received complaints about the poor implementation of “har ghar nal ka jal (Piped water for every home). The Chief Minister’s failure to address the corruption issue has made matters worse – both issues have been highlighted repeatedly by Chirag Paswan, during his calls for “Nitish-Mukt Bihar” — Bihar free of Nitish Kumar.