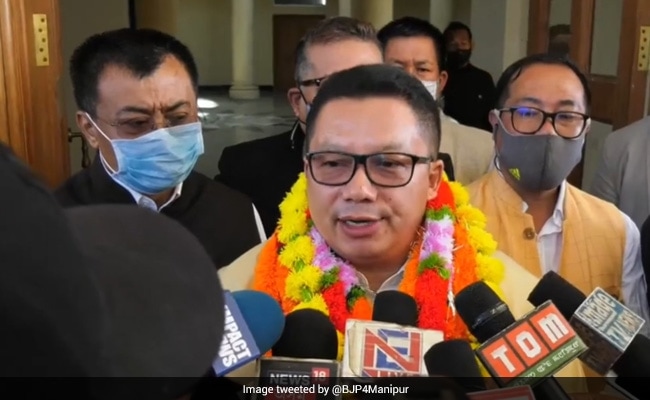 BJP leader Mayanglabam Rameshwar Singh, who was declared elected from Kakching assembly constituency by the Manipur High Court last week, was on Monday sworn in as an MLA.

The high court on November 5 declared the election of Y Surchandra Singh, the MLA of Kakching, as null and void as he did not properly disclose particulars of his assets and liabilities in the poll affidavit in 2017.

Surchandra, who was a Congress candidate, had defeated Rameshwar by 630 votes in the assembly election held in 2017.

However, he later joined the BJP.

Mr Singh had moved the court alleging that Surchandra did not disclose full particulars of his assets and liabilities in the affidavit.

Surchandra, however, has already been disqualified from the membership of the Assembly by the Speaker.

On the sidelines of the swearing-in programme held in the assembly complex, the Chief Minister said that legislature, judiciary and executive have separate functions and powers in a democracy.

The judiciary has exercised its power in the case filed by Rameshwar Singh and the government respects it, he said.