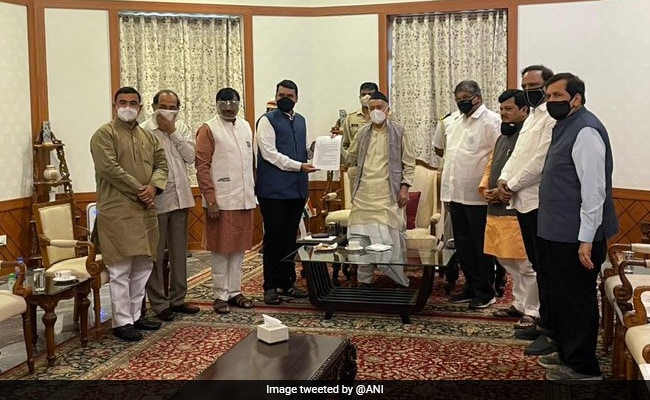 The BJP wants the governor to send a report to the President based on the allegations against Mr Deshmukh. The governor is likely to ask the chief secretary for a report after the BJP’s demands.

“The incidents that have been revealed in the last few days are worrying, whether it is extortion or the racket in police transfers. And the biggest worry is the silence of the Chief Minister. He has not said a word on this,” Mr Fadnavis said.

“Sharad Pawar has held two press conferences and he has tried to cover it up and save his minister. We don’t know where the Congress stands on this. The Congress seems to be speaking in multiple voices. We don’t know what their share they are getting in all of this. Whether this is the Maharashtra Vikas Aghadi or Maharashtra Vasooli Aghadi, we don’t know. We have requested, if the Chief Minister is not speaking then at least the constitutional head, the governor, can ask for a report and get the details of what has happened,” Mr Fadnavis said after meeting the governor.

The government had dismissed Mr Fadnavis efforts as “small crackers”.

The former chief minister shot back, “You will know soon whether this is a small cracker or an atom bomb.” Referring to Shiv Sena leader Sanjay Raut’s rebuttals to him, Mr Fadnavis said, “Raut is a small leader. I don’t need to react to him.”

Referring to the NCP’s comment that Rashmi Shukla, the former state intelligence chief, was an agent of the BJP, Mr Fadnavis said, “If an officer speaks the truth, he is a BJP agent, so if an officer indulges in extortion, is he a Shiv Sena agent?”

The BJP alleged corruption in police transfers and bribes were paid for transfers. These allegations are based on a report from the former Chief of the State Intelligence Department, Rashmi Shukla.

The government denied the allegations, saying that in 80 per cent of the transfers mentioned in the report, which allegedly happened for bribes, the officers mentioned did not get the postings that the report mentioned.

The issue, however, has turned political and the BJP is attacking the Maharashtra Vikas Aghadi government. The government has hit back saying this is yet another ploy by the BJP to defame and destabilise the government.

The BJP has demanded a high-level investigation by a high court judge under the supervision of the Supreme Court or CBI investigation into allegations made by former Mumbai Police chief Param Bir Singh in his letter to Chief Minister Uddhav Thackeray.