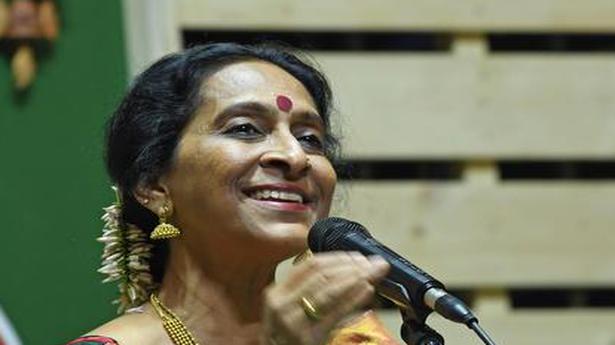 “Music comes to me more readily than words” – Ludwig Van Beethoven. What the great German composer said resonates in Bombay Jayashri’s music. Most children are introduced to music through lullabies sung by their mothers, and that becomes the most important bond that connects the child to the mother and the music. So it was with Jayashri. With her musician-parents as her initial gurus, the vocalist’s progress from lullabies to ragam tanam pallavi happened in the most natural manner. Music soothed her and this soothing quality extends to her music as well. Nominated for the Oscars for her lullaby in Life of Pi, she has now been awarded the Padma Shri.

Bringing up her daughter in Bombay, known for its cosmopolitan culture, perhaps inspired her mother Seetha Subramaniam to instil in Jayashri an open-mindedness towards art. She made her daughter not only listen to different genres of music but learn them as well. Thus, Jayashri grew up listening to ‘Sangeet Sarita’ on the radio, where one chosen raga would be rendered in Hindustani and Carnatic styles and also in film songs. It was this that prepared Jayashri to view music beyond borders and classifications.

Growing up in Bombay also meant training the mind to focus amidst the sounds from neighbouring houses in an apartment building. But it also meant getting to hear a Rafi song from one window and a Bangla song from the other. Jayashri began her musical journey singing advertisement jingles and participating in light and classical music competitions.

It was against this backdrop that young Jayashri began her crucial learning years under one of the finest teachers, Balamani, who opened up the world of music for her, besides laying a strong foundation in Carnatic music .

A chance meeting with legendary violinist Lalgudi Jayaraman made Jayashri move to Chennai to train under him. He inspired her in more ways than one. He taught her not just musical nuances but to appreciate everything that spurs creativity — the blossoming of the flower, the sunset, the birds feeding their young.

Jayashri acknowledges the role of her musical team as much as she does that of her various collaborators. Every time she worked with music directors such as M.S. Viswanathan, Ilaiyaraja, Harris Jayaraj or Jayachandran, or partnered with dancers like Chitra Visweswaran, Leela Samson and Alarmel Valli, it was an enriching experience.

The lessons learnt from the two cities continue to inspire her, and though she carries the prefix of the city where she spent her growing up years, the city that is home to her now defines her music. Jayashri has also used her music to reach out to children. Her video ‘Journey into autism’ led to several other projects. For the past eight years, Jayashri and her students have been visiting Manjakkudi to share their music with underprivileged students.

Dedicating the Padma Shri to her gurus, Jayashri says it fulfils the dream of her mother, the one who nurtured her musical vision.

The author is a Chennai-based