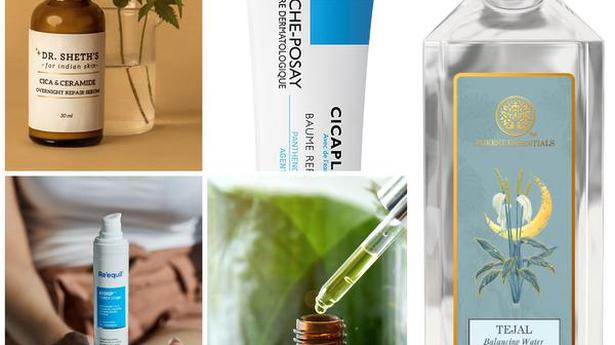 Repair and heal are the new buzzwords in beauty. As lasers, retinols, acids, and microneedling become increasingly popular, there is high demand for products that calm irritated skin. Centella asiatica, prized for its wound-healing ability, tops the list, being the hero ingredient in cica creams prescribed by dermatologists to restore the skin’s barrier. But while the ingredient is extremely popular in modern beauty routines, its benefits go beyond just skincare. It is an ancient herb, mentioned in texts such as the Sushruta Samhita, dating back to around 6 century BCE. Interestingly, it is prized for its soothing abilities in both modern and traditional medicine, even though the applications are different.

In Ayurveda, centella asiatica is known as gotu kola or mandukaparni and is prescribed to comfort the mind. “It improves cognitive function, reduces stress and anxiety, and purifies the blood,” says Dr Gunvant Hari Yeola, ayurvedic physician and principal of the DY Patil College of Ayurved & Research Centre in Pune. “It’s often confused with brahmi or seen as its substitute, though it is cooler in nature.” Indeed, if you read the fine print of most brahmi supplements or teas, you’ll find that the ingredient is centella asiatica, not bacopa monnieri, the scientific name for brahmi.

In the last century, scientists isolated active ingredients from the herb for topical application, which propelled it to its current position of a skin soother. “In the 1990s, the Malagasy Institute of Applied Research, run by the famous Professor Albert Rakoto Ratsimamanga, developed medicines based on local plants, the most emblematic of which is Madecassol, a wound-healing product made from this plant,” says Delphine Bouvier, Head Open Innovation, Sustainable Platform, L’Oreal. The cosmetic giant is now harvesting it in Madagascar to produce a variety of ‘green centella’ that guarantees traceability, fair wages, better extraction (thus consuming very little energy), and generating lesser greenhouse emissions.

A pinch will do

I can personally attest to this herb’s wound healing abilities as I use cica cream after an overzealous tretinoin application or a microneedling facial. If my job didn’t entail trying new skincare then I would only have three products in my beauty cabinet — tretinoin to refine, cica cream to soothe, and sunscreen to protect. Strangely enough, when I mix raw centella powder into a DIY mask it has an opposite, stimulating effect, which gives the skin a gentle flush. This means that you only need to use the tiniest amount (about a pinch) in a face mask. It just shows that despite its popularity, we are only just discovering its wide scope of benefits.

Centella asiatica has become very popular also because it is antioxidant and anti-inflammatory, says dermatologist Dr Simal Soin, founder of New Delhi’s Aayna Clinic. “We have realised that inflammation impacts everything — it is the root cause of both metabolic disease and skin ageing. Therefore centella has become more relevant than ever before.”

Dr Soin prescribes the herb for both internal and external benefits. “If someone asks me for an overall supplement I give them something with centella, if someone has rosacea or does laser, I give them a cica cream.” Because the ingredient is healing in nature, she says that it can be used safely by all skin types.

After Korea, the world

Though the ingredient has been around for decades, it became popular being part of several cult Korean products including Dr Jart’s Cicapair and the now notorious Purito Centella Green Level Sunscreen, currently under the scanner for its dubious SPF. Even though the ingredient is native to Asia, Korean skincare popularised it around the world. The fact that companies such as L’Oreal are investing in centella is testament to its healing potential and will help preserve this ancient herb for futuristic cosmetic applications.

The writer is The Hindu Weekend’s beauty columnist.