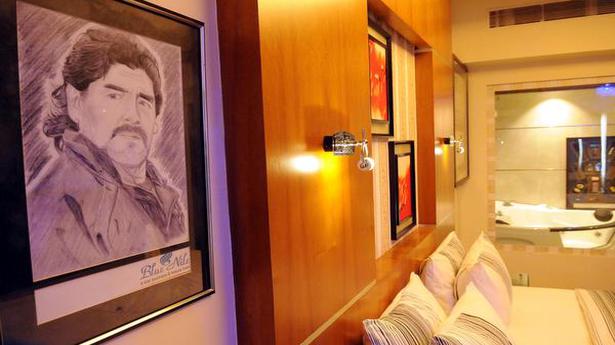 The news of Argentine football legend Diego Maradona’s demise has left a void among scores of fans in a football-frenzy Kerala. Malayalis, however, are cherishing the memories of the icon’s tryst with the State when he made a two-day visit to Kannur to promote a jewellery brand in 2012.

Hotel Blue Nile, the hotel suite in Kannur, where the soccer legend briefly stayed has been turned into a “museum” of sorts, replete with real-life memorabilia and the articles he used and left behind. Room number 309 is now known as ‘The Maradona Suite’ and its proprietor, V Ravindran, says he wanted to pay a tribute to his football idol. He adds that a commemoration was organised on Thursday in memory of the football legend.

Ravindran remembers the time Maradona set foot in his hotel, to the wonderment of his staff and friends. “It was as if the God himself was visiting us,” he says, adding, “Six months prior to his visit, we got instructions about a potential occupancy by a VIP but we were not told who it was. Following a security assessment and three months later, we were told that Maradona was going to stay here.”

In God’s own country

Maradona landed at the Kozhikode airport on October 23, 2012, and arrived in Kannur in a chartered helicopter. “Upon his arrival, we presented a bouquet and felicitated him with a ponnada (golden shawl). Through his secretary and interpreter, I introduced myself and, much to my surprise, Maradona came forward and hugged me, before proceeding to his room where he was offered tender coconut water,” says Ravindran, adding that he was given a food menu for Maradona’s stay.

Ravindran says that Maradona liked Russian salad and the staff were well-equipped to ensure that he felt at home. “We had already researched about his food preferences on the Internet. We roped in a top chef from Ernakulam who specialised in such delicacies,” he adds.

Naturally, security was beefed up and the suite was customised to suit his liking. “The entire room had to be modified as mandated by the authorities. We had imported and kept a brand of chocolate that he was known to be quite fond of,” he says, adding, “We had also hung photos of his family on the walls to make him feel at home,” says Ravindran. The footballer left the following evening after the photoshoot for the jewellery brand, the arrangement of which was made inside the hotel.

Following the legend’s demise, there is a renewed interest in the hotel with football fans dropping by to take a peek into the suite, while booking enquiries have ostensibly gone up, says Ravidran. Among the things preserved at “Mardona Museum” are cutlery and toiletry used by him, the outer shell of the tender coconut offered to him, and the shell of a giant tiger prawn that was specially prepared for him.

“Maradona signed on the curated food menu and later autographed footballs emblazoned with ‘Diego 10’. We have kept them in the room since,” says Ravindran, “Before he left, he gave me another hug. I will never forget that moment.”

The hotel has since rented out its hallowed suite sporadically for “true-blue Maradona fans” at ₹7,500 a night. Last month, Ravindran and his staff celebrated Maradona’s 60th birthday in his now-famous suite. He adds that plans are on to erect a statue in his memory.