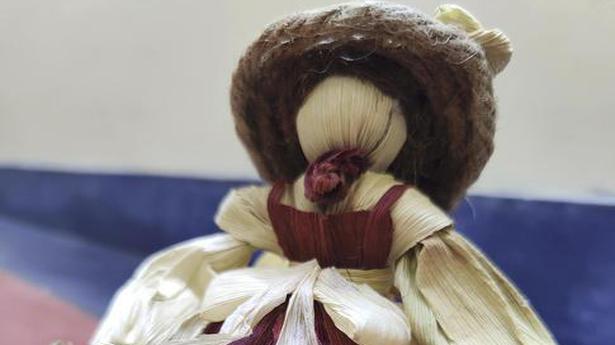 These eco-friendly corn husk dolls, made by a Delhi student, could be an innovative addition to golu

Nineteen-year-old Madhumita Karan from South Delhi is fascinated with the idea of making art from waste. This is how her corn husk doll came to be.

Madhumita then sent this particular doll to Chitra Mukherjee’s residence, where her mother is employed as the domestic help. “These corn husk dolls are amazing. I was impressed by the fact that it was created using waste material. These dolls are part of the culture and tradition in Western countries and are rather expensive,” says Chitra, who then posted the photos of these dolls on social media.

Madhumita used to collect corn husk from roadside vendors in Delhi to make these dolls. But during the pandemic, she began to buy whole corn and use the husk to create dolls. Corn, is a summer crop, which is available only from July to September. She collects husk from wholesale markets, and stocks it for later.

“After seeing photographs of my dolls on social media, more orders are pouring in,” says Madhumita, adding that, “This is the first time I am selling my work of art, and my first order for six dolls came from Chennai.”

City-based architect, S Thirupurasundari, is the first to have placed an order for the dolls as they rekindled fond memories of her childhood. “Twenty-three years ago my grandfather had gifted me a corn husk doll from Italy. It is still in good condition. This shows that these dolls have a long life if preserved well. I was impressed by the detailing Madhumita has given to each of her dolls. Corn husk dolls will be the highlight at our golu this Navratri,” says Thirupurasundari.

After doing extensive research online about corn husk dolls, Madhumita learnt about the different techniques used to make them. “I have made about 23 different types of dolls so far, and I am in the process of creating them in ethnic Indian outfits,” she says.

Dolls by Madhumita, as she calls them, has detailing such as buttons, bow ties, laces, frills, bonnets, baskets, flowers, cap, scarves and hats.

“It takes almost an hour and a half to make one doll, but the processing and preparation take an entire day,” says Madhumita. She carefully removes the husks, washes them in clean water, wipes with a clean cloth and lets them dry in the shade.

Once the husk is pruned and damaged edges are trimmed, it is ready to use. The colour is made by mixing water, salt and and dye and boiling them for 20 minutes. The artist also uses natural leaves, twigs and flowers for embellishments. “Twigs, twine and maida paste are used to design and bind the doll. The toughest part is making the hat,” she says.

Says Chitra, “So many queries began to pour in soon after I posted the images of these dolls. I am glad to see this young girl transform into a young entrepreneur.”

“I am overwhelmed,” says Madhumita, discussing the response. “I wonder how I am going to keep up with the demand.”

Pandemic washes away the usual vibrancy of Moolam Boat Race