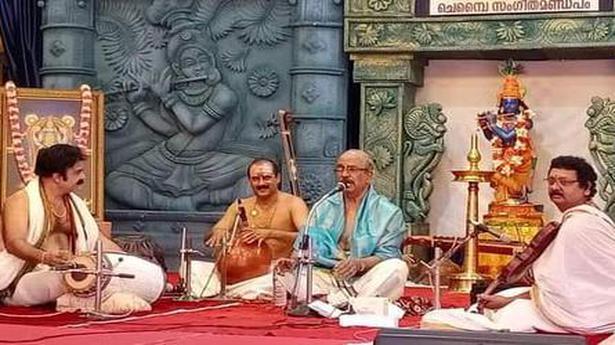 “What can be more precious for a musician than to receive an award in the name of his own guru,” said Mannur Rajakumaranunni when Guruvayur Devaswom chose him for the Sree Guruvayurappan Chembai Smaraka Puraskaram, 2020.

The octogenarian received the award on November 24, after which he led a small team of musicians in the rendition of the Pancharatnakirtanam. The two-week long annual Chembai Music Festival, that usually sees around 3000 musicians from across the country participating, could not be held this year due to the pandemic.

Known for his virtuosity as a vocalist, music teacher and music director, Rajakumaranunni was initiated into music by his mother Chinnamani Nethiar and was later trained by Vellinezhy Subramania Bhagavathar. Under Desamangalam Venkiteswara Bhagavathar’s tutelage, he turned into an acclaimed vainika too. But what made him more popular was the series of lecture-demonstrations on music, both vocal and veena, that were broadcast by Akashvani. They proved his skills in explaining the nuances of Carnatic music to the uninitiated in an intelligible way. He has performed concerts both in India and abroad. Even at this age, his voice is pleasing and the technique, masterly.

He came into cinema in 1975, when lyricist and director Sreekumaran Thampi invited him to sing the Ashtapadi, ‘Radhika Krishna’ for the film, Mohiniyattam. The song, directed by maestro G. Devarajan, catapulted him into mainstream film music. The song, ‘Allavin Thirusabayil’, rendered by him in the film Jayikkanayi Janichavan fetched him recognition. As a music director, his songs for the TV films Nangemakutty, Uchaveil, Sthree, Vararuchi and Thunchathu Ezhuthachan were captivating. Along with the late L.P.R. Varma, he played the role of a veena artiste in the serial Swami Ayyappan. Worth mentioning in this connection is his scoring of music for Isavasyopanishad, which was released as a CD.

Rajakumaranunni’s meeting with the legendary vocalist Chembai Vaidyanatha Bhagavathar was accidental. While at home in Chembai village, Bhagavathar once happened to listen to Rajakumaranunni’s concert on the radio and was impressed. On enquiring, he found that the musician belonged to an illustrious family in Mannur in Palakkad. He also happened to be the son of his friends, the well-known musicians, Ramavarman Thampan and Chinnamani Nethiar.

The Chembai Music Festival organised by Guruvayur Devaswom is a continuation of Bhagavathar’s musical legacy. Every year, until his death, the maestro performed on Guruvayur Ekadasi at the temple. A large contingent of musicians, young and old, used to accompany him to Guruvayur.

Bhagavathar invited Rajakumaranunni for the next Ekadasi concert. To his surprise, he was allotted 20 minutes as against the five minutes given to upcoming artistes. Bhagavathar was seated in the front row. The first composition the young singer chose was ‘Saphalamakkidenameejanmam’ of poet Muralikrishnan Bhattathiri. Rajakumaranunni had composed it in Saraswathi raga.

Bhagavathar praised his musical prowess and made it a point to teach him whenever the two met in Chembai, Guruvayur, Chennai or Palakkad. Rajakumaranunni was also invited to accompany Bhagavathar, who used to introduce him to listeners as his grandson.

Bhagavathar’s last concert was at Poozhikunnu Sree Krishna temple in Ottappalam in 1974. On that day, he asked Rajakumaranunni to offer him dakshina and then blessed him by placing both hands on his head. Bhagavathar also insisted that he attend the Ekadasi festival every year. The obedient disciple has been following the guru’s advice to this day.

This year, Rajakumaranunni was dismayed when the festival was cancelled. “It was Bhagavathar’s blessings that I was selected for the award; or else I would have broken the promise I made to my guru,” said Rajakumaranunni. A chemistry teacher by profession, Rajakumaranunni retired as principal of the Government Teacher Training Institute in Kumarapuram, Palakkad. In 1995, he received the National Award for Teachers.

Among his many awards and encomiums, it’s the title ‘Raga Ratnam’, conferred by Bhagavathar on him, that he treasures the most.

The writer and culture critic

is a trained musician.

‘Hitman 3’ review: The enigmatic Agent 47 returns in this killer endgame