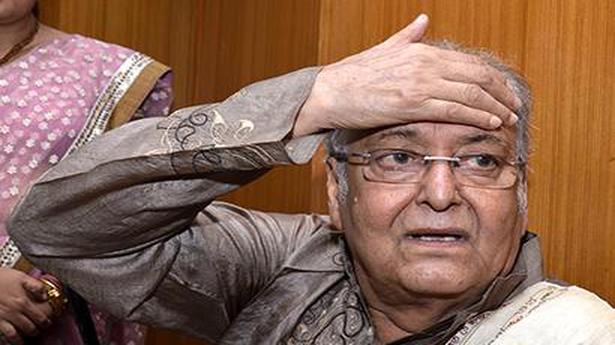 The 85-year-old thespian, who tested negative for coronavirus on Wednesday, was administered “musical therapy” and physiotherapy on Thursday.

Legendary actor Soumitra Chatterjee’s health condition has improved though doctors decided to continue monitoring him closely as the octogenarian’s comorbidities remained a matter of concern, a senior physician at the medical facility said on Thursday.

The 85-year-old thespian, who tested negative for coronavirus on Wednesday, was administered “musical therapy” and physiotherapy on Thursday, a doctor said.

Mr Chatterjee has been shifted to a non –OVID-19 ward.

“Mr Chatterjee had a sound sleep in the night. He has been administered music therapy aiming to improve his condition. He is responding to our verbal commands and that is a very good sign. The actor, however, is still in a confusion, restless state,” a doctor, treating the veteran actor said.

The critically acclaimed actor, who has the rare distinction of having worked with maestros like Satyajit Ray, Mrinal Sen, Tapan Sinha and Tarun Mazumdar, was admitted to a private hospital here on October 6 after he tested positive for COVID-19.

He had to be shifted to the ITU as his condition turned critical. A team of 15 doctors is overseeing him at the hospital.

A deep dive into cyanotype printing