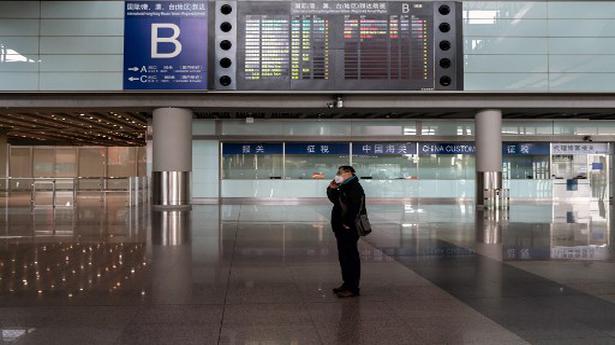 The moves have left unclear whether four repatriation flights announced by India for this month will go ahead on schedule. The Indian Embassy in Beijing said a Vande Bharat Mission (VBM) Delhi-Wuhan-Delhi flight set for November 6 will be rescheduled because the embassy “has not received the required clearances from the Chinese authorities”. Air India had scheduled further VBM flights for November 13, 20, 27 and December 4 to China.

On Tuesday, health authorities in Hubei province said 23 passengers on an October 30 Air India flight from New Delhi to Wuhan tested positive, of whom 19 were asymptomatic. Four symptomatic patients, including a couple travelling with a six-year-old, are being treated in hospital.

The announcement to bar travellers was made in separate and near-identical notices issued on Wednesday and Thursday by Chinese missions in India, the U.K., Belgium and the Philippines.

The Chinese Embassy in India said it had, because of the pandemic, “decided to temporarily suspend the entry into China by foreign nationals in India holding valid Chinese visas or residence permits” and “the Chinese Embassy/ Consulates in India will not stamp the Health Declaration Forms” that are needed to travel.

The notice added those “with emergency or humanitarian needs to visit China” can submit applications, and entry into China “with visas issued after November 3” is not affected. It said the suspension “is a temporary measurement that China has to adopt to deal with the current pandemic”.

With Beijing broadly controlling the local transmission of cases within the country and China returning to normalcy in recent months following stringent measures, authorities are now emphasising dealing with “imported” cases from international travellers as the current priority.