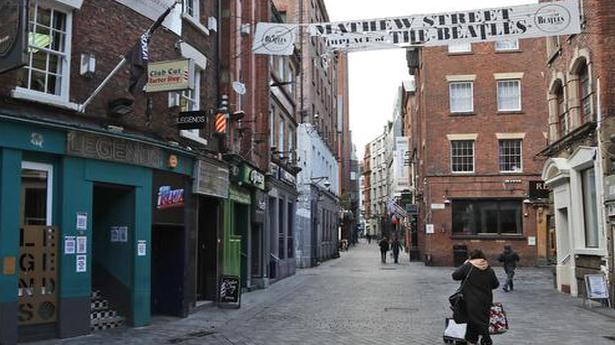 Liverpool, that gave the world the Beatles, feels it’s being punished by policies made in Britain’s capital, 290 km to the south

Liverpool, the English port city that gave the world the Beatles, weathered decades of industrial decline before becoming a celebrated symbol of urban renewal. Now, the coronavirus is putting the city’s hard-won revival in jeopardy, and raising tensions between the north of England and the wealthier south.

Scarred by abandoned buildings and government neglect during the 1980s, Liverpool made itself vibrant again by promoting local culture, nightlife, soccer and ties to the Fab Four. However, Liverpudlians retained their mistrust of London politicians, and the virus pandemic has brought it to the surface.

As the first area in England slapped with strict new restrictions to curb the resurgent coronavirus that have shuttered pubs and imperiled thousands of jobs, Liverpool again feels it’s being punished by policies made in Britain’s capital, 290 km to the south.

“At the beginning, when we all went into lockdown, it made sense. We were all doing it for a reason, and that was fine,” said pub owner Fiona Hornsby, who reluctantly shuttered her Bridewell bar in accordance with new curbs on business and socializing the government imposed this week.

With the complex localised restrictions, “it’s almost like we’re being separated, divided. It just doesn’t feel right at all,” she said.

Liverpool is not alone. As a patchwork of city — and region-specific measures replaces Britain’s nationwide lockdown, the pandemic has highlighted the gap in wealth and health between the relatively affluent south of England and the post-industrial north that also includes the cities of Manchester, Newcastle and Leeds.

Manchester — once an engine of the Industrial Revolution and now a hub for Britain’s music and creative industries — also is likely to fall under the government’s new restrictions. Mayor Andy Burnham is holding out for more financial support before consenting.

Burnham, a member of the left-of-center Labour Party that is in the opposition at the national level, accused the government Thursday of treating people in northern England as “second-class citizens” by imposing “a punishing lockdown without proper support for the people and businesses affected.”

The Hindu Explains | Why is Phase-3 of COVID-19 vaccine trial complicated?

When the coronavirus first hit the U.K. this year, the government told all but essential workers to stay home and ordered most businesses to close. The wide lockdown slowed the spread of the virus, but not before the country racked up Europe’s highest COVID-19 death toll. It currently stands at more than 43,200, though all such official figures are likely an underestimate.

The surge in new confirmed cases since shops, restaurants and other businesses reopened during the summer and students returned to schools and universities in the fall is more uneven than the U.K.’s first wave; infection rates currently are much higher in northern England than they are in the south.

In response, the U.K. government this week adopted a three-tier system that ranks cities and regions in England as medium, high or very high risk. Only the Liverpool region of 1.6 million people was immediately placed in the top tier, which requires pubs to shut and bars households from mixing.

Authorities in northern England agree on the need to act. With more than 600 cases per 100,000 people and its intensive care units 90% full, Liverpool is one of Europe’s worst-hit cities at this stage of the pandemic.

But there is also resentment over what many see as the government moving too quickly to lift the national lockdown restrictions and failing to create an efficient test-and-trace system to contain new outbreaks.

“The embers of the infection here were never extinguished and they burned brighter up here than they did elsewhere in the country,” Paul Brant, a Labour Party member of the Liverpool City Council, said.

“Unfortunately, policy in this country is too often directed as a result of what happens in the capital rather than the local conditions that are taking place here in the north,” Brant said.

Liverpool’s public officials want more say in controlling the city’s outbreak, an exit strategy for lifting the restrictions and money to make up for years of government spending cuts that have left public services in Britain’s less affluent areas threadbare.

The north-south tensions that the pandemic stirred up are never far from the surface. David Jeffrey, a lecturer in British politics at the University of Liverpool, said Liverpool’s 1980s clashes over money and policy with the Conservative government of Prime Minister Margaret Thatcher fostered a “’them versus us’ narrative” toward London.

Prime Minister Boris Johnson, a Conservative like Thatcher, is especially unpopular in the city. Liverpool natives, commonly known as Scousers, still remember that years ago a magazine Johnson edited accused them of “wallowing” in victimhood.

Video footage showing young revelers partying in the city’s street with little regard for social distancing on Tuesday night, hours before the new restrictions took hold, drove home that point.

Before the pandemic, that image would have been seen as a sign of the city’s success. Liverpool’s docks on the River Mersey, left abandoned as ships moved elsewhere in the late 20th century, have been regenerated with restaurants and museums, including an international slavery museum and a Tate art gallery.

Four universities give the city a youthful, lively population, and Premier League soccer teams Liverpool and Everton support thousands of jobs. Tourists come from around the world to see the houses where the city’s most famous sons, the Beatles, grew up and the Cavern Club where they honed their craft.

All that is on hold now.

“The football, the nightlife, people coming into town – it’s all gone,” said John Ambrose, a guide with the Beatles-themed Fab4 Taxi Tours. “We used to do about 4,000 tours a year. We probably only did about 12% of that this year.”

Government scientific advisers have suggested the current restrictions may not be enough and there will have to be even tougher measures, maybe a total lockdown, to bring the outbreak under control.

Some fear that the gains of northern cities like Liverpool and Manchester could be undone.

“Liverpool fought, everyone fought, to get into a position now where we were all actually looking forward to 2020,” John Hughes, the head of local industry group Liverpool Pubwatch, said. “But the situation we are in now is, we’re going to go back to them dark days of the ‘80s.”

Local business owners say the support offered by the government – paying two-thirds of the salaries of workers in businesses forced to close – isn’t enough to prevent widespread hardship this winter.

“I think if they came up and spoke to us, actually came and talked to us, then maybe they’d understand and maybe think about things a little differently,” said pub owner Hornsby, who has laid off 20 staff members. “But they don’t, do they?”