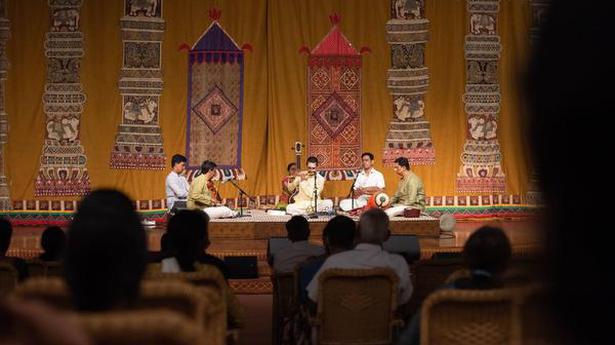 In the last week of November 2020, Bharatanatyam exponent Malavika Sarukkai walked into the Narada Gana Sabha in Chennai after nearly nine months to record a performance for Yours Truly Margazhi, a festival organised by The Federation of City Sabhas in collaboration with Kalakendra. Besides the camera crew, and her musicians on either side of the stage, the auditorium, which seats 800, wore a deserted look. While she is used to dancing for the camera, Sarukkai says, “That afternoon, even though I missed the warmth of an audience, I danced like there was no tomorrow. I felt I had reclaimed the space where dance belongs; it was like going back home.”

Last year was the first time since 1927 — when the Margazhi season of music and dance began in Chennai— that there was a lull. Auditoriums remained empty even as the digital world came alive to recreate the live experience as closely as possible. The iconic Music Academy’s 94th annual concert went digital, with a week-long festival of music between December 24 and 31. On a note on the website, president N Murali said, “The Academy cannot be left behind in this digital revolution. It was, therefore, decided to suitably re-design and enhance its website so as to make for a more enriching and interactive experience for rasikas wherever they are situated.” Since then, no events have been held, although secretary Ramji Natarajan tells us that they are contemplating a course of action and there will be an announcement soon.

But now, from the slumber of hibernation, proscenium stages in Chennai, and across India, are slowly turning their lights on, with performances that adhere to safety protocol. On February 7, after 11 months, classical musician Sandeep Narayan drove to Hosur to perform to a live audience as part of the annual Hosuril Thiruvaiyaru. His excitement, even over the phone, is palpable. “I thrive off audience interaction and I missed that,” he says, referring to the three concerts he recorded during what constituted the Margazhi season in Chennai.

When Vaibhav Arekar met his dancers of Sankhya Dance Company last December — to just dance — he says they were all overwhelmed with emotions. The group is gearing up for two performances: one at the prestigious NCPA in Mumbai on February 20 (sold out at half occupancy), and another in Pune later in the month, with a handful of tickets still available.

This weekend (February 13 and 14) contemporary dancer-choreographer Preethi Athreya presents Bird, a “series of solo movement propositions” inspired from Gabriel Garcia Marquez’s novel, A Very Old Man with Enormous Wings. The venue is the Alliance Française of Madras, known to host eclectic content, including the much-loved Short + Sweet Theatre Festival. When the four dancers — Deepak Kurki Shivaswamy, Surjit Nangmeikapam, Vikram Iyengar and Joshua Sailo — and Athreya met, after working individually for the past few months, she says they were “exploring beyond the composition, in an attempt to work with what it feels like to be among people, bodies, breath, and voices, again”.

In the heart of Chennai, the iconic RR Sabha in Mylapore now sports a new look and feel. They conducted their own Margazhi festival in December, with about 85 people in its 250-seater auditorium. Hari Krishnaswami, Secretary, Narada Gana Sabha, says the auditorium is clocking a steady increase in terms of bookings and people have begun planning as far ahead as December 2021.

At Sir Mutha Concert Hall, head of operations Krish Kumar curated a concert at The Foyer, a new outdoor venue under a banyan tree. On the last Saturday of January, students of the music school on campus took part in this test run. Other additions include a VIP lounge and a ticketing portal. “I do believe that we need to do whatever it takes to revive the industry and, with that intent, the audio/lighting inventory has been slashed by 50% for the next eight months or so,” he says.

From The Artery in Royapettah, which was designed for chamber concerts, founder and arts curator Ramanathan Iyer says he has reconfigured the space as a ‘set’ for recordings, along with a recording studio. He consciously opted out of going virtual, but believes every crisis is an opportunity for re-invention, adding, “Despite the democratic nature of the digital medium, we haven’t tapped into its full potential.”

It is good to be back

Chennai-based Mahesh Venkateswaran, a senior technology professional who quit his corporate gig to start Madrasana, a Margazhi concert series, organised a six-day virtual music festival in mid-December. Artistes were recorded in interesting outdoor venues “so no concert looks the same”. He adds, “We even played around with the placement of the instruments to enhance the audio quality; the camera gives you this advantage.” He is currently ideating on how to push the bar not just in form, but also content.

In December, Kalakshetra also played host to their annual festival and sold tickets at 50% occupancy. VR Devika, scholar, storyteller, cultural activist and arts connoisseur, who donned her silks and self-made mask to watch the show, recalls, “I was thrilled to be able to go out and actually watch these performances come alive… in the company of trees and the sea breeze.” At the Bharata Kalakshetra auditorium, director Revathy Ramachandran recently wrapped up the two-day Trinity Festival, which was streamed online too. “Perhaps the live is going to co-exist with the live streaming experience,” she says, addingthat “nothing can take away from the thrill of watching a dance or music performance in person”.

Meanwhile, from his office in Nungambakkam, Bruno Plasse, director of Alliance Française of Madras, says he is positive of the auditorium getting back on its feet, and soon. “I think people are ready,” he says, based on the enquiries he has been receiving. Their latest event at the Edouard Michelin Auditorium was held on February 5, where two shows of Sit Down Ra, an adults-only comedy by Temple Monkeys, organised by Chennai Art Theatre, were sold out. “After all, human interactions cannot be contactless and many important decisions to start projects start with personal interaction,” concludes Plasse.