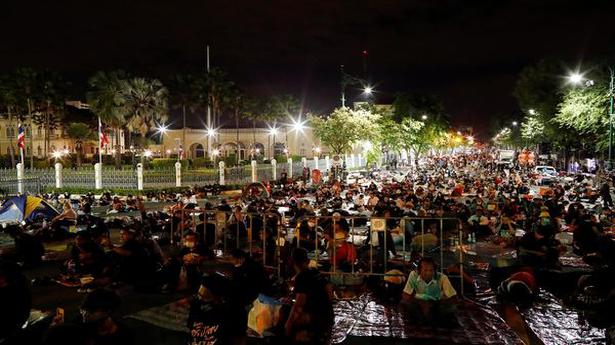 Despite police appeals over a loudspeaker to disperse, the group spilled across the Ratchaprasong Intersection in one of Bangkok’s busiest commercial districts. It was the scene of bloodshed in 2010, during more than a decade of violence between supporters and opponents of the Thai establishment.

“Like dogs cornered, we are fighting till our deaths,” said Panupong ‘Mike Rayong’ Jadnok, one the high-profile protest leaders who remains free. “We won’t fall back. We won’t run away. We won’t go anywhere,” he told the cheering crowd.

Protesters also filled the walkways of the nearby shopping complex, holding up the three-finger salute adopted as a symbol of opposition after Mr. Prayuth’s 2014 coup.

“The people who came know that there is a ban against public gathering of five or more,” police spokesperson Kissana Phathanacharoen said. “We will take things step by step.”

Three months of protests in the country of 70 million have been largely peaceful, as was a march by tens of thousands of people on Wednesday. But in one incident, police pushed jeering protesters away from a motorcade carrying Queen Suthida.

Overnight the government banned political gatherings of five or more people and the publication of news and online information that could threaten national security.

“The measures were necessary to ensure peace and order and to prevent further incidents after protesters affected the royal motorcade and violated the monarchy with provocative language,” government spokesperson Anucha Burapachaisri said in a statement.

The protests have largely been driven by students and young people.

“We don’t want anyone or the next generation to have to put up with this. We have to end it with us,” said Mameaw, 17, who came to the protest right after school exams.

Police said they had arrested protest leaders Parit ‘Penguin’ Chiwarak and rights lawyer Arnon Nampa. Mr. Arnon said on Facebook he was being forced to board a helicopter to the northern city of Chiang Mai, where he faces sedition charges over a speech in August.

The protest movement aims to remove Mr. Prayuth, saying he manipulated an election last year to keep hold of power. He says the election was fair.

Those marching on the streets also want a new Constitution and have called for a reduction in the powers of the King. They want his role to be clearly subject to the Constitution and seek the reversal of orders that gave him control of the palace fortune and some army units.

Criticism of the monarchy is punishable by up to 15 years in prison under lese majeste laws, though Mr. Prayuth said earlier this year the King had asked that they not be enforced for now.