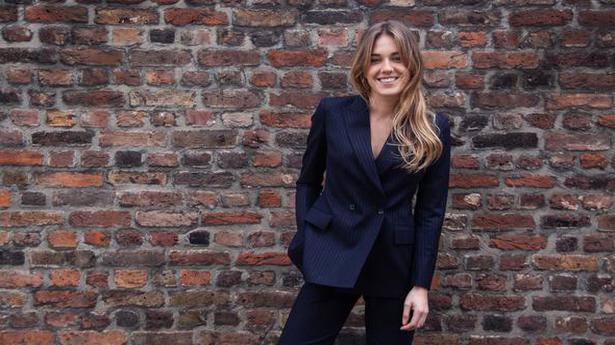 After endless months of loungewear, more women across the world are taking their cue from politicians like US Vice President-elect Kamala Harris and movie stars and investing in the pantsuit

There is a lot riding on the pantsuit, a visual metaphor for female emancipation and empowerment this year. Back in October, the hashtag and social media campaign, #AmbitionSuitsYou, was meant to mobilise American women to vote. It addressed the biases against women who were driven, and hot pink suits worn by comedian Amy Schumer and other celebrities filled Instagram feeds. Then when US Vice President-elect Kamala Harris took to the stage in Delaware on November 8, it wasn’t just her victory speech that made headlines but her white pantsuit as well. The Carolina Herrera ensemble, fashion pundits pointed out, was a nod to suffragettes in the early 20th century, who wore all-white while fighting for the right to vote.

Clients of The Deck, including actor Gillian Anderson (top left)

“Historically, politicians wearing suits has been a deterrent for some women because of the horrible stereotype… female politicians wearing dowdy suits. I think it is time we changed the way we think about that, with Kamala Harris or AOC [American politician Alexandria Ocasio-Cortez] or whoever else,” begins Daisy Knatchbull of The Deck, the first women’s tailor to have a shopfront on Savile Row. When Knatchbull, 28, opened shop in September on the most famous men’s clothing street in the world, she made headlines. After all, this is where venerable tailor Henry Poole invented the tuxedo. And where the residents are known to meet the sartorial needs of kings, politicians and Hollywood royalty, from The Prince of Wales and The Duke of Kent to Tom Hardy and Benedict Cumberbatch. Knatchbull has her A-listers too: Lauren Hutton, Gillian Anderson, Maggie Gyllenhaal and scores of others. “It is exciting to see more and more woman wearing the suit as a vehicle of their power,” she explains. “Women tell me it gives you confidence; it is like modern armour, you know.”

At The Deck (named after a deck of cards), four signature silhouettes are offered as a starting point: The Single-Breasted, The Double-Breasted, The Boyfriend and The Safari, accompanied by a choice of straight-leg, wide-leg, flared or cigarette trousers, and more than 7,000 types of material. “We work with the Savile Row cloth merchants but we whittle it down for our clients so they are not overwhelmed… I know how women shop,” says Knatchbull. When we speak she is at work, wearing a three-piece pin-stripe suit, but with trainers and a T-shirt. “I like to ‘casual’ my suit down and later when I head out to dinner for a friend’s birthday, I’m going to put on a pair of heels and a silk shirt,” she says.

Many designers say that after months of lounging in T-shirts and track pants, smarter dressing is on its way back in, with focus on softer tailoring, colour and textured fabrics. Knatchbull agrees, adding that the pandemic has given clients time to think about consolidating their wardrobes, to buy less and buy better. It is about a long-term investment, not a short-term fix. “Everyone keeps saying luxury is going to be down 30% but people are no longer going to be spending on a dress for one event. Instead, they are going to put that money on a suit that will last them a lifetime. And they don’t need events for that, they can wear the jacket and trouser separately, they can pair it with trainers, T-shirts,” she continues.

Inside The Deck on Savile Row

For women, by women

While The Deck’s head tailor, Michaela Boskova — “she’s brilliant, her mother and grandmother were tailors on Savile Row” — manages everything from fittings onwards, the suits are made at an atelier in Portugal. Knatchbull says it allows her to charge £2,200 as the starting price for a made-to-measure suit rather than £5,000.

With clients from across the world, including Delhi and Mumbai, the requests for tropical and white suits are growing. “They often bring in reference imagery and I think I try to project what they want to be and what inspires them,” she laughs. Clearly, 2021 will see more women in smoking jackets and gender-fluid party wear, especially during the movie awards season.

Knatchbull is no stranger to creating trends. Back in 2016, she became the first woman to wear a top hat and tails for Royal Ascot, the Queen’s favourite horse race. This was two years before Suicide Squad’s Cara Delevingne wore a three-piece suit and top hat to a royal wedding — Princess Eugenie’s. “I was working at Huntsman [legendary Savile Row tailor] as a communications director then,” she recalls, “and it was an incredible feeling. I couldn’t believe that no one had done it before.” She launched her business on King’s Road in the basement of another shop. “The rise of female empowerment was building in the background. At the same time, suiting was coming back as a central wardrobe staple for women. So many women were being let down by the ready to wear market. We are given sizes that society tells us we should be in. We often apologise for our bodies… just because our arms are too long, or our thighs are bigger than our waist. At The Deck, I offer something for women that men have been offered for centuries. And while there are other women tailors, there’s room for more of us, to do our best to level the playing field.”

A few of the silhouettes from The Deck

Knatchbull admits that she knew nothing of tailoring before she started, and that she picked up as much as she could while at the Savile Row tailor, Huntsman. In an article in Tatler, she writes that it was her maternal grandmother who sparked her interest in fashion and who taught her how to cut a basic pattern for making dresses and that her great-grandmother Edwina Mountbatten [the last Vicereine of India] “oscillated between wearing ballgowns and military uniform and apparently owned underwear embellished with Cartier jewels”. When I ask her about her Mountbatten heritage, she tells me, “I celebrate it in my own way but it is not something I bring into my work life.”