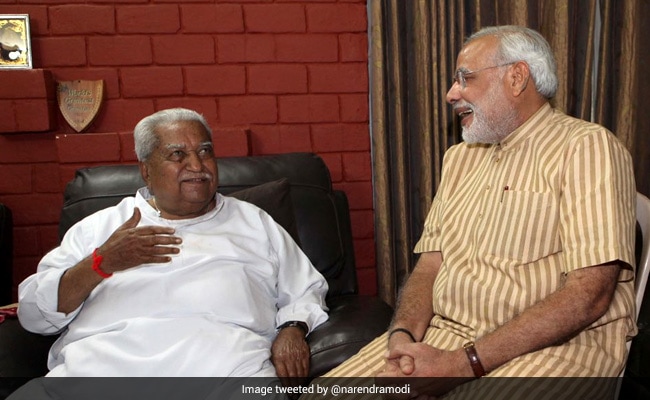 PM Narendra Modi tweeted a photo of him and Keshubhai Patel

Prime Minister Narendra Modi today gave his condolences to the family of former Gujarat chief minister Keshubhai Patel, who died at 92. PM Modi tweeted a smiling photo of him and the former chief minister, and called Mr Patel a mentor who “groomed many younger karyakartas including me”.

“Keshubhai mentored and groomed many younger Karyakartas including me. Everyone loved his affable nature. His demise is an irreparable loss. We are all grieving today. My thoughts are with his family and well-wishers. Spoke to his son Bharat and expressed condolences. Om Shanti,” PM Modi tweeted.

Mr Patel was chief minister of Gujarat first for a few months in 1995 and then between 1998 and 2001. PM Modi succeeded him before he became Prime Minister in 2014. In 2012, Mr Patel quit the BJP to form the Gujarat Parivartan Party, which later merged with the BJP.

“Today, India and Gujarat have lost a great leader. I cannot imagine that our beloved Keshubhai Patel ji is no longer with us. I’m deeply saddened. His death is like the death of a father figure,” PM Modi said in a video statement.

Born in of Junagadh district in 1928, Mr Patel joined the BJP’s ideological mentor Rashtriya Swayamsevak Sangh (RSS) in 1945 as a pracharak. He started his political career as a worker for the Jan Sangh, the predecessor of the BJP.

Mr Patel was also the chairman of the Shree Somnath Trust, which manages Somnath temple in Saurashtra region.

Many other leaders tweeted their condolences.

President Ram Nath Kovind tweeted, “With the demise of Keshubhai Patel the nation has lost a stalwart leader. His long public life was dedicated to improving the lives of millions, especially in villages. As champion of farmers’ causes, he enjoyed extraordinary rapport with masses.”