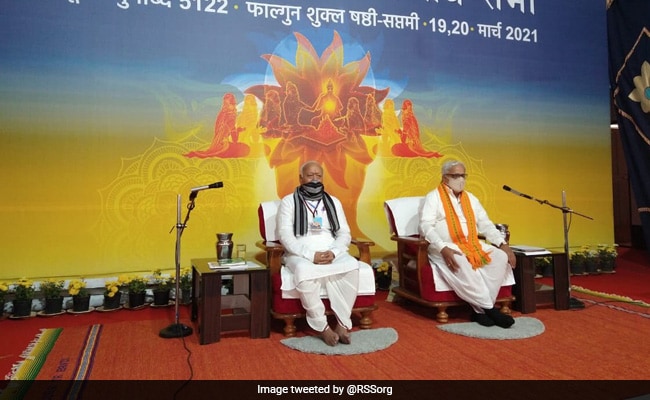 RSS chief Mohan Bhagwat at the inaugural of two-day ABPS meet in Bengaluru.

Service during coronavirus pandemic and the Ram Mandir Abhiyan showcased the resilience and cultural unity of Indian society, he said, adding that the ABPS will pass resolutions thanking the society for responding positively during the pandemic, and for unity expressed in the country during the Ram Mandir Nidhi Samarpan Abhiyan.

“Extensive public contact has happened during the coronavirus and Ram Mandir campaign and it has come to notice that there is a growing curiosity to know about RSS,” Mr Vaidya said.

He said there is an increase in the number of those who want to associate with the Sangh.

“All may not join the Sangh, but they are ready and eager to work with Sangh. The way to engage and involve such people in building a better society along with expanding and planning Sangh work in the next 3 years will be discussed at the ABPS this time,” he added.

RSS chief (Sarsanghchalak) Mohan Bhagwat and incumbent general secretary Suresh ‘Bhaiyyaji’ Joshi were present at the inaugural of two-day ABPS meet, during which deliberations will take place regarding the year gone by and plan for the next three years.

The meet attended by about 450 delegates will also see the process of electing the Sarkaryavaha on Saturday. For Mr Joshi, 73, the current Sarkaryawah, this is fourth term in office, with each term having three years.

There is speculation that if Mr Joshi doesn’t seek another term, Sah-Sarakaryavah (Joint General Secretary) Dattatreya Hosabale from Karnataka may be picked, during the election which is usually by unanimous vote.

Due to the pandemic, RSS shakhas (branches) and other Sangh events had completely stopped between March to June last year, but shakhas gradually resumed in July, Mr Vaidya said. However, RSS Swayamsevaks (volunteers) were active from day one in all states of the country in serving the society and helping mitigate the situation caused by lockdown and amelioration lives of those affected, he added.

The volunteers through Seva Bharati were actively involved in various activities during the lockdown, he said adding that 5,70,000 RSS workers served at 92,656 locations in the country.

Noting that the Sangh shakhas are present in all districts in about 6,495 areas and among this, shakhas have become active again in 85 per cent khands, Mr Vaidya said below the Tehsil level, Mandals comprising 10-12 villages have been formed.

There are 58,500 such Mandals in the country among which active shakhas are present in 40 per cent of Mandals and contact has been established in 20 per cent of them.

Hence, 60 per cent of the Mandals have been covered either through shakhas or by establishing contacts, he said.

“The Sangh network is expanding throughout the country and in the next 3 years, Sangh aims to reach all the Mandals in the country,” he said, adding that there are three categories of shakhas — students, those who are earning but below the age of 40, and those who are above 40 years of age.

Speaking about the Ram Mandir Nidhi Samarpan campaign, Mr Vaidya said Ram Mandir is not just a temple as Ram is the representative of the cultural ethos of the country.

RSS volunteers were actively involved in this campaign and the focus of the campaign was on reaching out to maximum people and families in the country, he said, 5,45,737 locations were reached by approximately 20 lakh workers and were able to contact 12,47,21,000 people.

The resolutions that will be passed during the ABPS will be to acknowledge and thank the society which responded positively during the pandemic and the way India helped other countries in mitigating the situation, Mr Vaidya said. Another resolution will be on the unity expressed in the country during the Ram Mandir Nidhi Samarpan Abhiyan.

On the allegations of houses being marked during Ram Mandir Nidhi Samarpan Abhiyan, he clarified that there is no such practice and the allegations are unfounded. “Such marking is not our system… we consider everyone as our own, whether they give donation or not,” he said.