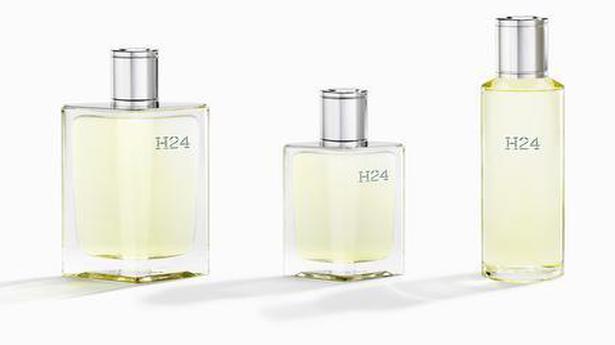 H24, the luxury brand’s first men’s perfume in 15 years, has a note of warm metallic steam or sclarene

What is a masculine scent in 2021? After a year of confinement and lockdown dressing, brands for men have expectedly resumed their marketing strategies with umbrella terms like ‘sophistication’ and ‘modern elegance’. Christine Nagel was having none of that. The head perfumer at Hermès has often talked about the creative freedom she enjoys at the maison, without interference from marketing teams or a dependency on focus groups. Her H24, the first big men’s fragrance at the brand since the iconic Terre d’Hermès 15 years ago, is ‘‘for a man in motion, free but aware of his roots’’.

Unlike the woody Terre d’Hermès, Swiss-born Nagel’s latest takes her customer down an unfamiliar path, with clary sage as ‘the backbone’, narcissus, rare rosewood essence and sclarene. The last, a chemical compound with a metallic steam scent reminiscent of freshly ironed trousers, could reference her childhood — in interviews she has talked about her grandmother making trousers and the tang of wool and hot metal that she associated with the studio.

The scent also emanates from the workshops headed by Véronique Nichanian, the woman behind Hermès menswear for 31 years. Nagel, the first female head perfumer at Hermès, has often looked to Nichanian for inspiration, finding similarities in their relationship with materials. She is just as accomplished — early achievements include Jo Malone’s Wood Sage & Sea Salt, Miss Dior Chérie and Narciso Rodriguez For Her. H24 is green, modern, radiant, and with it Nagel “wants to shine a different light on the man of tomorrow”. Excerpts from her interview with The Hindu Weekend:

What influenced the decision to go botanical and vegetal for H24?

I did not deliberately seek to move away from the raw materials used in men’s perfumery. I just wanted to give an Hermès perspective on an enhanced men’s fragrance, a youthful fragrance. Using botanicals for a men’s fragrance today is a real risk, but I would dare to say it was necessary to be bold, and only houses like Hermès that offer real creative freedom to their artists can allow it. Maybe it will pave the way for others? Maybe it will start a new generation of fragrances.

How is the H24 man different from the man who has been faithful to Terre d’Hermès for 15 years?

The digital revolution and the arrival of social media have changed our way of life and our relationships with the world and others. For many, it is as revolutionary as Gutenberg’s printing press. But I imagine the H24 man to be anchored in his time and his energy. In his mind, the digital world and new technologies co-exist harmoniously with craftsmanship.

Fragrance experts have confirmed that the gendered label doesn’t matter any longer. Does this new perfume check the unisex box?

It is still a men’s fragrance, but I believe that fragrances have no gender, any more than they have colours, sounds or tastes. Society has created codes that we find very difficult to escape from. Like in your Indian culture, as well as in Oriental cultures, rose and patchouli are worn abundantly by men. And it’s beautiful. We just have to dare to be bold, trust our instincts and try things out. So I would be happy if H24 was worn by a woman. In fact, initial feedback has been unanimous on this subject.

A sketch of the bottle design

Tell us about the taming of the narcissus.

The narcissus is a difficult flower that is not easily tamed. Too hard, too rigid, and considered to be a man’s flower, it is rarely used. I like this difficulty because I am tenacious. We worked on a co-distillation with the company Robertet (the world’s largest natural fragrance and flavours maker) which allowed me to soften the narcissus without causing it to lose its lively, almost electric aspect. It corresponds to the slightly raw touches of colour that give Véronique’s collections such modernity.

While H could stand for ‘hour’, ‘Hermès’ and ‘homme’, 24 could refer to ‘24 Faubourg’, the brand’s address in Paris and the hours of the day

I deliberately choose words relating to touch to talk about perfume and scents, and the same words come to me to describe the disconcerting impression of being able to feel the light, supple and fluid materials in Véronique’s collections just by looking at them. Just as she doesn’t shy away from weaving her fabrics from technical fibres on ancient Japanese looms, I use co-distillation, synthesis and biotechnology, and dare to combine them with traditional methods to give a different finish, a different texture. I also find that the electrifying, colourful touches in her collections have this same particular vibration, this sensation of olfactory force that is specific to my creations.

Do comment on the need to go natural, from the fragrance itself to the bottle and packaging.

For Hermès and for me, the quest for excellence is accompanied by an acute awareness of environmental issues. Formulas are designed with their impact on the planet in mind, and the selection of raw materials takes their carbon footprints into account [the rosewood essence, from a South American tree, is sourced from a sustainable micro-supplier in Peru]. I am very sensitive to these new challenges and as a result I am attentive to progress in biotechnology, a virtuous technique that is nature-friendly and avoids exhausting its resources.