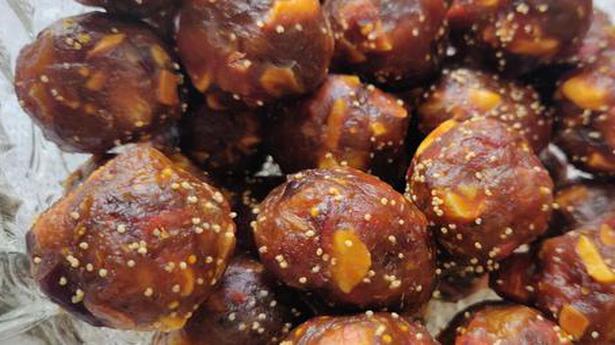 The good old traditional, nutrient-rich laddus made of sesame, dry fruits and more are back in trend as snack balls, packaged as healthier alternatives for anytime munching

Energy balls, nutri balls, bliss balls, protein balls… a snack ball by any other name tastes as good and packs as much nutrition. The delectable, low-calorie pick-me-ups are also simply convenient — to both make and take — just pop one in while at work or leisure.

Abinas Nayak, winner of Masterchef India Season 6 this year, has fond memories of the rasi laddus (sesame balls) his grandma used to make regularly when he was a kid. “Those days, we used to eat a whole variety of these, like wheat balls and coconut balls with a smattering of amaranth seeds. Though the concept of snack balls always sustained, it is good to see them coming back as healthier alternatives to junk food today,” he says.

Abinas feels they are quite versatile. “You can prepare them with a variety of cereals or millets as base. It’s also nice to have a combination of these or mix and match,” he points out. However, it is not just the easy-to-source traditional ones that he roots for, but also some offbeat varieties. “Perhaps the most exotic bliss balls I have come across were made from a mixture of desiccated berries and an assortment of nuts in Mumbai once,” he remembers.

Praveen Anand, Executive Chef — South Indian cuisines at ITC hotels, says he has noticed more common ones like peanut jaggery balls and sesame jaggery balls finding favour during winter, possibly because, “they are believed to generate heat in the body and give you energy.” He adds, “Adding dates or even making it the base ingredient is great way to cut out sugar. These nutrient-rich additions commonly see now are flax seeds, amaranth seeds, sunflower seeds, water melon seeds, pumpkin seeds and so on. These lend a difference in taste and enhance scope for experimentation.”

Versatility and ease of preparation are also what chef and cookbook author Mallika Badrinath loves about such healthy snack balls. “A variety of cereals and millets commonly available, like ragi, jowar (cholam), fox-tail millet, pearl millet, barnyard millet and so on, that can be used for energy balls. In fact, tasty combinations of these give your new flavours,” she says.

A hack Mallika offers is making use of a candy stick. “You can have them like a lollipop,” she says. Despite all the nutritional boost, she has a word of caution: “It is a salubrious substitute for junk food but our diet has to be supplemented with foods containing Vitamin C, especially at a time like now, when natural immunity has never been so paramount before,” she adds.

Hyderabad-based nutritionist and chef Sridevi Jasti feels our sensory and nutritional needs have changed over time. “Our soil is depleted of its nutrition and consequently our foods have less nutrition. As compensation, we have to look at a broader diet,” she says. Nutri laddus are a popular part of her organic food store Vibrant Living Foods. “For many, snacks are sweets and sweets are snacks. So they should be healthy. One popular item has been coconut berry balls where palm jaggery, which has a lower glycemic index, is used along with soaked almonds and berries. Sometimes, amla powder is also added,” she says. Some other snack balls on offer are carrot laddu, pumpkin laddu and pumpkin and pistachio custard laddu, to suit different palates.

Understandably, energy balls are a hit with gym-hitters. Nutritionist and home chef Priyanka Devika J, who runs The Nurturist based in Thiruvananthapuram, says she often gets enquiries from body-builders for the protein balls. “Such people look for simple food items providing better results. Healthy energy balls rightly fit that bill. It can be deemed a superfood and packs a fair amount if fibre too,” she says.

Some bakers, like Patric Johnson L from Coimbatore, find more takers for the nutri ball versions than dry fruits and nuts per se. His online store ‘The Nut On’ is focussing more on their nut balls. “It comes with dates as base and has roasted almonds, cashew, pista, fig and black-grape raisin. All the ingredients are hand-chopped according to required size to maintain the right proportion,” says Patric. He brings out the energy balls in two varieties — without ghee and with A2 ghee from Indian cow breeds.

For many, healthy bliss balls are the go-to home-made snack option while steering clear of fried favourites. Some like Priya Ravikrishnan from Thiruvananthapuram, goes the extra mile to make her own health mix that serve as the base for the nutri balls her family loves to munch on.

“Along with my home-prepared multi-grain mix, which packs in 18 nutritious items such as bamboo rice, finger millet, foxtail millet, flaxseed, green gram, horse gram and so on, I add mashed dates, and coarsely powdered almonds, walnuts, cashew, white sesame seeds and a wee bit of honey,” she says. The scope for experimentation is wide, even for those trying at home.

Clearly, these balls are in your court.

Helmets to predict Alzheimer’s, a stress-canceller, an app to track seizures : Health tech at CES 2021

Untapped destinations in and around Visakhapatnam