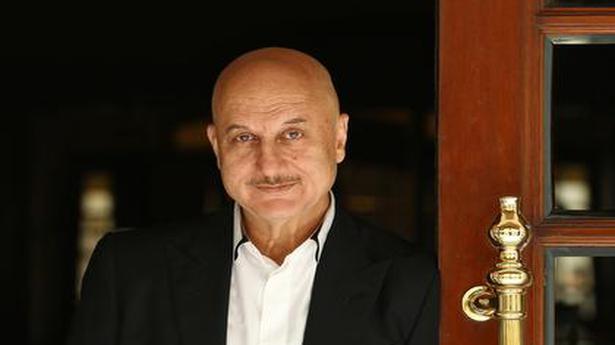 Anupam Kher discusses his latest book, Your Best Day Is Today, which chronicles his experiences during the pandemic, among other things

Anupam Kher begins the introduction to his new book, Your Best Day Is Today (published by Hay House India), with this line: ‘The urge to write had never been more compelling than the one I felt earlier this year.’ It hadn’t been a year since the release of his autobiography, Lessons Life Taught Me, Unknowingly, wherein his memorable moments including many from his 35-plus years of acting in films — were already recorded.

So, why the compelling need to write another book so soon?

“To overpower my fear,” says the actor over a video call. He was in New York in the wake of the COVID-19 pandemic and returned home in March to witness a nationwide fear. It rubbed off on him as well. “I have seen wars, riots and natural calamities in my lifetime. But none of them had a mass fear of this scale.”

Writing is therapeutic for Kher. In movies, when he has to do a challenging scene, he writes them down. He decided to do the same with the pandemic. “I started writing about my insecurities, my sense of uncertainty, what will happen to this world, etc. I also wanted to look for hope.”

The book is autobiographical as well as self-help, Kher says, discussing other aspects in the interview. Excerpts:

I record my thoughts. Say, if I wake up after an interesting dream, I record it. I can’t sit down at a particular time to write. None of my books were written like that. I like to have an organic feel about it. I record my thoughts first. Then, I get them transcribed. Only after that do I sit down to put them together.

You experienced personal difficulties during the pandemic. Your mother and brother contracted the virus…

I now joke about it. When I started to write the book, it was as if God said, ‘Let me just give you situations that will make this book more authentic.’ You never think that bad things will happen to you. When my brother and I took our mother for a CT scan, the doctor said she was COVID positive, which came as a complete shock to us. She hadn’t stepped out in eight months.

The doctor asked us to admit her in the hospital. And, she wasn’t even carrying her phone. She thought she was just heading out for a drive with her sons. So, it was tough to tell her the news without causing any panic. Later, my brother tested positive too. And, I lost a few of my friends. Death was becoming a mere statistic rather than an emotion. All these things make the book very relatable. It is an extension of my autobiography.

Going by the book’s title and its chapters —‘Declutter’, ‘Reach out’, ‘Change the law of life’ among others — did you intend this to be a self-help book?

Yes. All my books are self-help. When you have encountered fear and difficulties, you feel that the same things will be happening to millions of others. You want them to feel okay, too. I think the best thing about autobiographies is that you identify with the author’s struggle and that gives you encouragement.

Of late, we see quite a few Indian actors, including yourself, in Hollywood films and series. How do you see this collaboration grow in the future?

As an actor, I feel I represent my country when I work in international films. It is a great feeling. I have been doing international films since Bend It Like Beckham. It gives me a sense of responsibility. It is important to tell the world that we have great talent.

Also, after doing over 500 films in India, I wanted to explore international films. They have actors who you aren’t used to working with and speak a language in which you don’t think. So, they make you sharpen your skills.

There is a perception that Hollywood looks at Indian films as just Bollywood musicals. Is that true?

They aren’t really interested in our cinema unless it involves some economics — for example, if they want to open a studio here. Also, India is a large country. After every 500 kilometers, there is a different food, language and culture. They like to categorise things. When they categorise our cinema as Bollywood, they immediately think of song and dance. We have also killed our identity because we have Kollywood and Tollywood and other “woods”, which sound like a bad imitation of Hollywood. We are, however, making a mark in many areas. Today, the American Vice-President is of Indian origin. Many technology CEOs are Indians. So, in cinema too we will make our presence felt.

What is one thing that you picked from working abroad?

They are unbelievably well-prepared. Their pre-production and paperwork are brilliant. Everybody has a great sense of professionalism. Initially I wondered why they have offs on weekends. But on the weekdays, they work with so much focus. And, even I started to look forward to the weekends. They are, in some cases, more evolved than us. We are also getting there. But talent-wise, we are on a par with anybody in the world.

You have been in films for nearly four decades and have played varied roles. But are there any you haven’t gotten the chance to play?

I feel I have another 20 years of work. So, I will think about it when I reach that stage. Right now, I am doing the work that I’ve been wanting to do. I don’t really care much about what I’ve done. I have been a part of some phenomenal films, some good ones, some ridiculous ones. I own them all. But I don’t carry the burden of an actor of 517 films. I always start as a newcomer.

What lesson has the pandemic taught you?

That is the title of the book. Your Best Day Is Today. I knew it for many years because my mother used to say that. I genuinely believe that the best moment is right now, talking to you. Because this is the moment I am living.