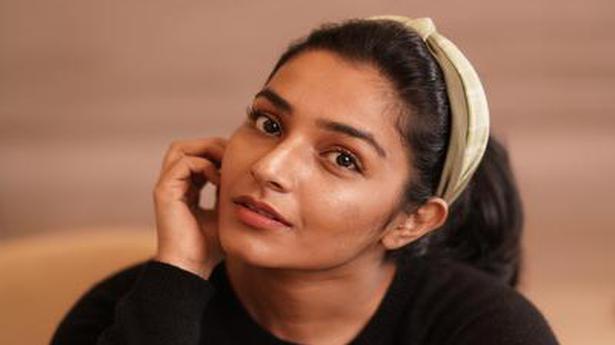 As her movie ‘Love’ reaches theatres, Rajisha Vijayan talks about working during the lockdown and her Tamil début opposite Dhanush

Rajisha Vijayan’s career in Malayalam films is marked by a string of meaty roles. She made a dream début with Anuraga Karikkin Vellam in 2016, which won her the Kerala State Film Award for the Best Actress. In 2019, she upped her game with three roles — the titular character in the coming-of-age drama, June, a cyclist in Finals and a survivor of sexual assault in Stand Up.

The pandemic-induced lockdown turned out to be a productive phase for the artiste; she has acted in two films, Khalid Rahman’s Love and Rahul Riji Nair’s Kho-Kho, during this period. Love is set to release in GCC (Gulf Cooperation Council) countries on October 15. She is also working in her first Tamil film, Karnan, opposite Dhanush.

In a chat with MetroPlus, Rajisha says that it was like a blessing to get back to work. “When the lockdown started, it was fun initially since I could take a break and relax. But within a few weeks, I couldn’t wait to be on a film set. So when Rahman [Khalid Rahman] called up to discuss the project I was so thrilled that I didn’t even ask for the details. Love had more or less the same crew of Anuraga Karikkin Vellam. It felt great to collaborate with them again. Also, I was looking forward to act with Shine chettan (Shine Tom Chacko), a fabulous actor,” she says.

In Love, she plays Deepthi, wife of Anoop, played by Shine. The narrative is centred around the problems in their life, which eventually lead to many complications. “The film is a thriller, a genre I haven’t explored before. As an actor, I want to do all kinds of films. That experience eventually helps an artiste to grow,” she explains.

Rajisha points out that she did not feel restricted working with the COVID-19 protocol in place. It was shot in an apartment complex in Kochi with six main characters and a minimal crew. “Everything was organic. Even if the pandemic was not there, the story would have been set indoors. But then there would have been more people on the location. While I commuted from my home to the set daily, others stayed in the apartment complex itself until the shoot got over. I have the same look and use the same costume throughout the movie. In fact, after a few days I was tired of seeing myself in the same dress!” she chuckles.

Meanwhile, she has completed the shoot for Kho-kho, a sports drama directed by State award-winner Rahul Riji Nair. She plays Mariya Francis, a kho-kho coach who builds an all girls’ team in a tribal school braving several odds. She observes that although it was shot during the lockdown in Kollam, the experience was completely different from the shooting for Love.

“Rahul is a friend and when I heard the story I asked him whether we can go ahead with the project knowing fully well that it won’t be easy to make a sports movie with the restrictions in place. But everything happened so fast that it went on the floors within a month and was wound up in over a month’s time. There were days when we wished there were more people on the sets. However, the crew pulled it off smartly. When you see the visuals, you would never imagine that it was shot during the pandemic,” she adds.

The film has real-life kho-kho players. “They’ve killed it with their performance. Kho-kho is an underestimated game in spite of being one of the oldest traditional sports in the country. Presence of mind and speed hold the key,” she says. It was among the movies selected at the Co-production Market of National Film Development Corporation Film Bazaar 2018.

Talking about Karnan, directed by Pariyerum Perumal-fame Mari Selvaraj, Rajisha says that it is a rustic tale set in a different era. “Being on the set of a Tamil film has been a new experience. I had to work on the look. And since I don’t know Tamil, I learnt it. My character speaks the Thirunelveli dialect,” she says.

As Love releases this Friday, the actor admits that she never expected it to reach cinemas while shooting. “It’s disappointing that I won’t be able to watch it. But I am happy that at least some viewers can. After all, OTTs can’t replace the magic of the theatre experience,” she signs off.