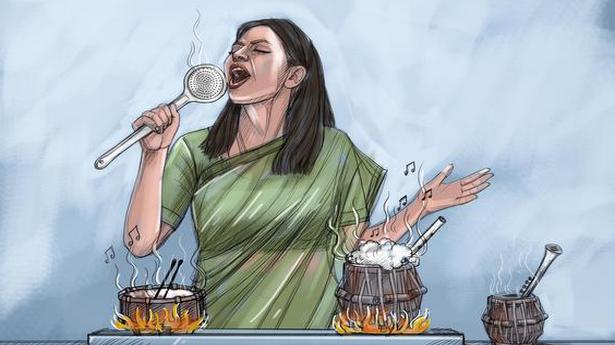 From Tyagaraja and Dikshitar to Purandaradasa and Andal, they have all given us recipes in ragas

Samaithu Paar is a cookbook that hardly needs any introduction for South Indians. Written by Meenakshi Ammal several decades ago, it became a best-seller and was later translated into English as Cook and See. Based on this, I have often wondered why a book titled Cook and Sing should not be done based on Carnatic songs that contain recipes for, or carry mention of, various dishes.

I am nowhere near writing such a book, but each time I come across references to dishes I make a note of them and recently when singer S. Sowmya asked me to put together an online quiz, I dedicated one round to food in Carnatic music. And no, it had no questions related to the famous sabha canteens.

Andal in her Thiruppavai arguably describes the best pongal. The verse, ‘Koodarai Vellum’, is the 27th in the set and after having observed all the austerities during the previous days of Margazhi, Andal sings of pongal, made by boiling rice and milk, in a covered vessel, with so much ghee that when the dish is eaten, the ghee trickles down the elbows. In his ‘Poompavai Padhigam,’ composed at Mylapore, Gnanasambandar sings of pongal with lashings of ghee, cooked by straight-waisted women, during the month of Thai (January).

Annamacharya in the 15th and 16th centuries mentions many food items in his compositions. Of these, ‘Entamatramuna’ mentions the nippatu — crispy deep-fried rice crackers.

How it turns out depends on the quality of batter, says the composer, and adds that this is true even of Venkateswara in Tirumala: those who worship Devi say this is a Goddess, the Kapalikas claim him as Adi Bhairava, and the Vaishnavites say he is Vishnu.

Purandaradasa gives a recipe for payasam in his ‘Ramanama Payasake’. It starts right from the making of the vermicelli itself. But a lesser-known song of his goes to even greater detail. ‘Naivedya Kollo Narayanaswami’ describes a veritable feast and those interested can see Manmathan Ullathil’s blog, www.maddy06.blogspot.com, where he has studied several other Purandaradasa kritis that mention recipes.

Of course, when it comes to a feast who better than a king to prepare the bill of fare? In his ‘Pallaki Seva Prabandha,’ King Shahji of Thanjavur, writing in the 17th century, offers dinner to Lord Tyagesa — sherbets of high quality, pongal, morkuzhambu, rice fritters, pooris fried in ghee, dosas and idlis, pickles, shelled and roasted lentils, sweets, fruits, mixed rice of various kinds, payasam, thirattupaal, honey, curd rice, puliyogare, thick sour cream, spiced buttermilk, water from the Ganges, and paan with camphor. Can’t believe it? Read his ‘Aragimpavayya’ in raga Nadanamakriya.

Could this be the first song to mention dosas? Apparently not. In ‘Daniye Noditheno’, Purandaradasa speaks of Venkateswara feasting on boiled rice and dosas. The sale of prasadam in Tirupati is also not something new. Kanakadasa, a contemporary of Purandaradasa in the 16th century, derides the deity, in his ‘Bandevayya Govinda Shetty’, for commercialising everything, including appam, adhirasam, and the other prasadam on sale. Of course, by far the sweet most closely associated with the shrine is the famous laddu.

There is a theory that Muthuswami Dikshitar in his song ‘Shanka Chakra Gada Panim’ in Purnachandrika mentions this dish in the line ‘Amritasara Bhakshanam’. Apte’s Sanskrit dictionary acknowledges that amritasara is a sweetmeat, but it need not necessarily be the laddu, and as far as we know, the laddu in its present form at Tirumala is a 20th century creation. But yes, as Kanakadasa attests, the place was famous for sweets from much earlier.

Dikshitar, however, does mention sesame rice or ellu sadam in ‘Divakara Tanujam,’ set in raga Yadukula Kamboji. Dedicated as the composition is to Saturn, the song includes the deity’s favourite dish, and it is common practice to see it being offered at temples on Saturdays.

Like Purandaradasa, Kanakadasa also gives us a recipe — for self-realisation, in his ‘Adigeyanu Madabekanna’. I go by Prof. William Jackson’s translation and it starts off right from the washing of the vessel, the cleaning of the ingredients, and the heating of the medium — these being, respectively, truth, arrogance and the body. It is most interesting that almost 400 years later, Bhagavan Ramana Maharshi at Tiruvannamalai created a similar song on the making of the appalam. Translated into English by Prof. K. Swaminathan, it is structured as a straightforward recipe for appalams and is at the same time an exposition on the pathway to realisation.

There are surely many more examples of this kind. We need to cook and sing to find out.

The author, a historian, writes on Carnatic music.