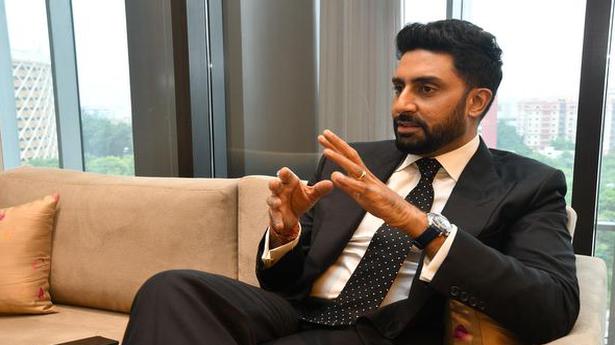 Actor Abhishek Bachchan says he has realised that it’s important to be aware of one’s limitations as an artiste as opposed to trying for something that perhaps isn’t meant to be. Bachchan, who made his screen debut with filmmaker JP Dutta’s romantic drama “Refugee”, completed two decades in the Hindi film industry earlier this year.

In an interview with PTI over Zoom, the 44-year-old actor said his time in the industry has given him clarity on how to navigate his career.

“I’ve looked at a film in its entirety, it’s not been about just my character. Having had these 20 years of experience, maybe I’m better equipped now to know what I cannot do, as opposed to what I don’t want to do.”

“That’s also important for an actor, to know what your limitations are, what you can’t do, so don’t bother trying to do it because it’s just not meant for you.”

After a brief hiatus post his ensemble comedy “Housefull 3” (2016), Bachchan returned to screen with director Anurag Kashyap’s “Manmarziyaan” in 2018.

The actor said his effort over all these years has been to only push himself harder, knowing fully what roles wouldn’t work for him.

“As an actor, you still live in hope that you break those shackles and work hard towards achieving something that seems unattainable. Today I’m well aware of certain things that don’t suit me.”

After his return to the big screen, Bachchan also made his digital debut with Amazon Prime Video thriller “Breathe: Into The Shadows”, which started streaming in July.

His latest, Anurag Basu’s crime-comedy “Ludo” also found a digital release, this time on Netflix, bypassing a theatrical outing due to the coronavirus pandemic.

Bachchan said these 20 years have been “full of learning,” where he has taken all the good and the bad in his stride and become the actor he is today.

“In retrospect, there’s so much you could’ve or should’ve done differently but then there’s so much that you shouldn’t change at all either. Those experiences have made you the actor you’re today. I continue to learn even today.”

Bachchan said he constantly reviews his work to see what he can improve as he believes the day he is content with his performance, it would mean he has stopped growing as an actor.

“Every time I see my older films and find something that I could have improved, goes to show that somewhere you are evolving, improving. I still haven’t found that one film where I think ‘I am satisfied’ The day that happens, means you’re not growing as an actor,” he added.

The actor will next be seen in “The Big Bull”, reportedly based on India’s biggest securities scam of 1992. Directed by Kookie Gulati, the film will premiere on Disney+ Hotstar.

Bachchan is also slated to star in “Bob Biswas”.