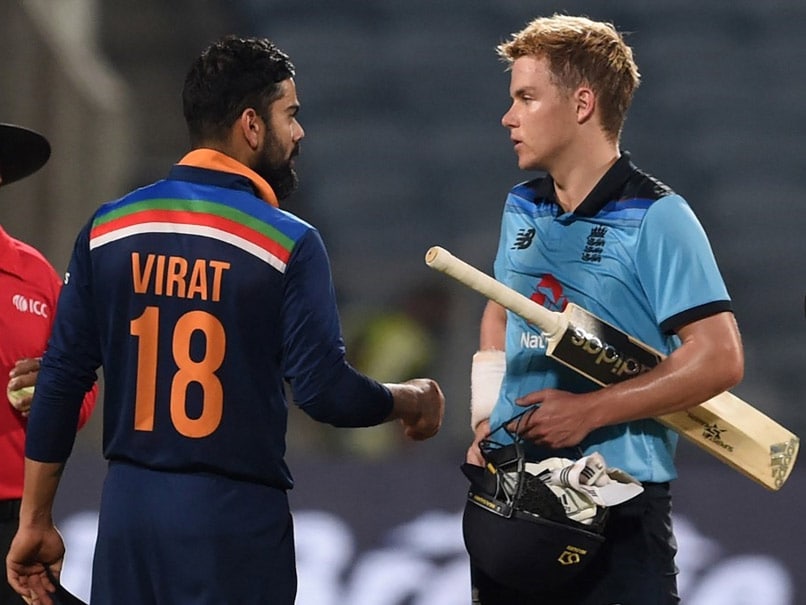 Bowlers held their nerves in crunch moments as India defeated England in a thrilling third and the final ODI by seven runs and clinch the series 2-1 at the Maharashtra Cricket Association Stadium in Pune, on Sunday. Sam Curran, playing out of his skin, played one of the most outstanding limited-overs knocks of recent times under pressure and almost pulled off a remarkable victory for the vistors. After Rishabh Pant and Hardik Pandya’s heroics with the bat helped India post a competitive total of 329 runs on a batting friendly track, the Indian bowlers also joined in the party and kept England batsmen under check early on in the run chase. Just when India were looking in commanding positions, Curran’s fighting knock gave the hosts some nervy moments and it started reflecting in their fielding as they dropped a couple of catches in the penultimate over bowled by Hardik Pandya to sum up a poor day in the field. T Natarajan, playing his first game of the series, held his nerves and bowled superbly to defend 13 runs in the final over.

Unlike the last two games, Bhuvneshwar Kumar dismissed both the England openers Jason Roy and Jonny Bairstow cheaply in his first two overs to give India a solid start.

Last match’s hero, Ben Stokes, despite getting an early reprieve from Hardik Pandya early on in his innings, failed to covert his start and got out for 35 runs after hitting a full-toss from T. Natarajan straight into the hands of Shikhar Dhawan.

After his dismissal, Hardik breathed a sigh of relief and folded his hands to thank Dhawan for getting a big load off his chest. England skipper Jos Buttler had an off day as well as he got out leg before after a successful review by the Indian skipper Virat Kohli.

David Malan combined with Liam Livingstone and strung together a solid 60-run partnership to keep England alive in the game. Malan scored a run-a-ball half-century — his first in ODIs, while Livingstone backed his impressive debut performance with another solid knock of 36 off 31 balls.

Shardul Thakur removed both Malan and Livingston within a span of couple of overs to put India in the commanding position. Moeen Ali also made a hefty contribution with a 25-ball 29 but it was Sam Curran whose maiden ODI fifty kept England in hunt for a memorable victory.

Earlier, after being put in to bat by England skipper Jos Buttler, India rode on half-centuries from Dhawan, Pant, and Pandya to put  fighting total of the board.

Dhawan and Rohit Sharma gave the hosts a solid, forging their first century partnership of the series, adding 103 runs for the opening wicket. Rohit was the first one to depart after scoring 37 runs, while Dhawan carried on his fine form smashing yet another fifty in the series. They both were dismissed by leg-spinner Adil Rashid in quick succession as England pulled things back.

Kohli and KL Rahul also departed cheaply as England spinners made inroads. After that, Pant and Hardik continued to bat with their natural attacking flair and put English bowlers under pressure with a 99-run stand for the fifth wicket.

However, both the players got out in quick succession which derailed India’s innings. Shardul Thakur hit a few lusty blows towards the end, helping India crossed the 300-mark. Wickets kept tumbling in the death overs as India failed to play their full quota of 50 overs and were bowled out for 329 runs in 48.1 overs.

Mark Wood was the pick of the bowlers for the visitors returning with figures of 3/34 from his seven overs, while Adil Rashid gave away 81 runs in his 10-over spell but accounted for the crucial wickets of the Indian openers.