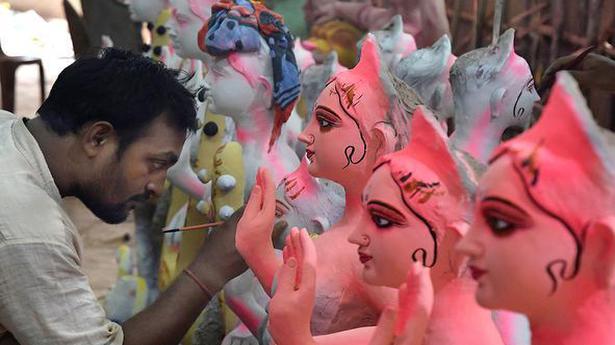 The call of the conch will be heard through headphones. The dhunuchi’s scent — a smoky mix of camphor and coconut husks — will be summoned from memory. Durga Puja celebrations are innovating and adapting to the challenges of COVID-19 to usher in necessary cheer in a difficult year.

CR Park, the bastion of Delhi’s Bengalis, will be unusually quiet this pujo, as will pandals across the country in this year of social distancing. In any other year, they would have seen a footfall of over two lakh daily. This time, of the nearly 10 pujas that take place there, only the one inside the premises of the Kali temple will be held.

In Visakhapatanam, too, prayers are being held in temples Kali instead of pandals — at Waltair Kali Bari and the Kali temple in Visakhapatanam Steel Plant, the site of the city’s prominent Ukkunagaram Durga Puja Committee (UDPC) puja. No devotees will be allowed inside any of the three, however. Pushpanjali will instead be broadcast online.

“All rituals will be followed, Saptami through Navami. We have a partnership with DEN (a popular cable channel) and Tata Sky to stream the morning pujas and evening aartis. You can also watch them on our website, YouTube and Facebook,” says Prodip Ganguly, of the CR Park Kali Mandir Society, echoing the intentions of others across the country.

In Chennai, secretary Jaypal Menon of Dakshin Chennai Prabasi Cultural Association (DCPCA) says the live rituals will be “virtually aired for members who want to experience it from home.” He adds, “Last year, we had a footfall of about 2,500 people each day. This time, however, we are not inviting non-members or even our regular patrons. Association members who are older than 65 and younger than 10 are also being asked to stay home, for their own safety.”

Others, like the Anna Nagar-based Dakshini Society, have multiple plans at hand and are waiting for the next set of Corporation directives before deciding how to proceed. Anindo Pal, member of Visakhapatnam’s Ukkunagaram Durga Puja Committee that hosts over 200 Bengali families every year, says, “In such challenging times of a pandemic, we have to keep our emotions intact and follow the safety protocols. We are planning to live stream the puja so that people can offer pushpanjali from their homes.”

Hyderabad’s puja committees will also be streaming their sessions online — live on social media platforms. Many, like Attar puja committee, are also talking about restricting the number of visitors to 50. Atin Chowdhary, member of Bangiya Sankskriti Sangha, says “Core committee members and the priest make up about 20 people. Controlling people will be a tough job, so we have decided to stream the puja instead. There will be no food stalls, no bhog.”

Mukul Dasgupta, secretary of Chennai’s Dakshini Society echoes this: “We will not be serving bhog. Every year, we bring dhakis (drummers) to make things festive and a thakur (traditional chef) to prepare the traditional bhog, all the way from West Bengal. We provide them housing and take care of their food. But this time, we didn’t want them to travel all the way and be put at risk.”

Not everyone, however, can imagine Durga puja without the bhog. DCPCA is arranging for the meal to be packed in eco-friendly boxes and delivered to members’ home. “It will be cooked by our regular Chennai caterers. After all, food is a big part of puja,” says Menon. In Delhi, those living in a two-kilometre radius from CR Park’s Kali Mandir can book the five-item bhog online. “We have got special four-tier dabba carriers from Mumbai for this purpose,” Ganguly says, adding that the cooks and delivery persons will be tested for COVID-19.

Hoteliers and restaurateurs are also keen on lighting up the celebrations with festive menus and traditional bhog. Hyderabad’s Marigold hotel has a bhog package with khichdi, dalna, begunbhaja (fried brinjal), a selection of toks (Bengali bittersweet dips) and a much-loved ilish (hilsa) selection. The khichdi comes with a smoky flavour, to give the feel of it being cooked at a puja pandal’s firewood kitchen. Chef Partha adds, “We also have five-six Bengali sweets, like nolen gurer payesh and rosogolla.”

Hyderbad’s Mercure hotel is adding a twist. They know Bengalis love radha bollovi (a sizeable puri with a spiced dal filling). They have a compact menu but packed with favourites like chop, devilled eggs, the chicken dak bungalow and the sweet, yellow basundi pulao.

Kathi rolls, Mughlai parathas, ghugni — Visakhapatnam-based Sayantika Adak Ghosh devours it all at the city’s pandals every year. This time, she will be serving them from her home kitchen instead. “This way, I can recreate the festive feel at home for my seven-year-old son,” she says. Sayantika is also busy finishing her Mandala art series of Maa Durga which will be the highlight of this year’s homey Durga Puja for her.

In fact, all around the country this year, celebrations have shifted from the pandals to homes. “In my entire lifetime, I have never seen Durga Puja being celebrated this way,” says Rita Basu, a core committee member of Utsav, that conducts the festival every year at AMCOSA in Visakhapatnam. “We used to start preparing for it from June with rehearsals for cultural programmes and corporate sponsorships.”

But not all cultural programmes are on hold; Chennai’s DCPCA plans to stream those as well, in the absence of a stage and physical audience. “All the performances are being recorded beforehand by the small groups in their own homes and setups,” says Menon.

Chowdhary reiterates from Hyderabad, “Keeping in mind Bengalis’ love for music and cultural activities, the Bangiya Sankskriti Sangha has decided to keep that online as well. So artists will perform from their respective homes and bring home the puja mood.”

A lack of food stalls and banner space, however, means a lack of advertising and funds for the idol. Chennai’s DCPCA and Dakshini Society nevertheless are making it a point to support the idol-makers, who arrived in August only to be met with a drop in demand. As Menon points out, “They set out from Kolkata, and in the absence of a direct train to Chennai, took a detour via train and bus to get here. This, even though they were not sure if they would get orders.” Dasgupta reiterates, “We have an idol ordered and ready; how many people we allow during the puja remains to be seen.” Most committees are bringing in the idols on October 21, for celebrations that will run till October 26.

At CR Park, the idol will stand five feet tall instead of the usual 20. In fact, the presence of an idol itself is unusual this year. Ramit Mitra, who conducts pre-puja walks of idol making workshops a month before Ashtami, says, “There are two major idol makers in CR Park who in normal circumstances would have made approximately 40-50 idols, big and small. This time, they are doing maybe five small ones.”

Many have also turned from idols to the ghot (a copper, brass or silver pot) puja: this involves worshipping a representation of the idol, in the form of a coconut in a kalash.

The festivities remain emotionally significant for other reasons. DCPCA, that has been using a closed, air-conditioned venue for years, is moving back to the sprawling grounds where it had its first celebrations in 2013. And for Delhi’s Kashmere Gate puja, this year is historic. It is their 111th puja, shares Som Prakash Mitra, president of the puja committee: “Up until 1911, we would only have ghot puja. And now after 109 years, history is repeating itself.”

The Indian urban forager is discovering flavours of edible weeds

We need resilience and relevance