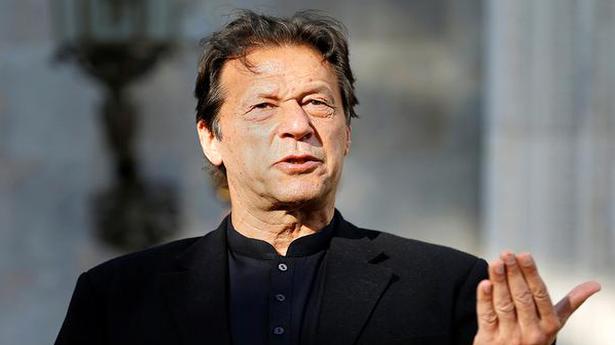 Our only issue is basically over Kashmir, Pakistan PM says amid easing of tensions.

Pitching for trade between Pakistan and its neighbours like India, Pakistan Prime Minister Imran Khan said that the entire region would benefit “if India makes a move, if the Kashmir issue is resolved”.

The comments came amidst signs of a possible easing in relations a month after Indian and Pakistani border commanders agreed to abide by a ceasefire, including a visit by the first sporting teams from Pakistan in years and talks on the Indus water treaty next week. Foreign Ministers of both countries have also been invited to the same regional conference on Afghanistan to be held in Dushanbe on March 30, which could be the first such opportunity for senior officials to meet since 2019.

“With India, it is very unfortunate that we have tried to resolve our issues through dialogue like civilised neighbours, but it has not worked out. Our only issue is basically over Kashmir,” Mr. Khan told experts and academics at the Islamabad Security Dialogue on Wednesday, repeating an earlier statement made in Colombo in February.

Mr. Khan called India’s decision to amend Article 370 and reorganise Jammu and Kashmir as a “big jolt” that led to a “full breakdown in ties”. After the move, Pakistan cancelled all trading ties with India.

“India will also benefit with more trade and connectivity to Central Asia. This [Kashmir] is the one issue that holds us back. We will try our full efforts but it is for India to make a move. Until they do that, we cannot move forward,” he added, in a possible indicator that Pakistan expects steps from New Delhi on Jammu and Kashmir’s status before making the next move on trade.

Mr. Khan’s visibly softened tone on India follows a speech by Foreign Secretary Harsh Shringla on Monday that also appeared to have toned down some of the language on Pakistan.

“India desires good neighbourly relations with Pakistan and is committed to addressing issues, if any, bilaterally and peacefully. However, any meaningful dialogue can only be held in a conducive atmosphere and the onus is on Pakistan to create such an atmosphere,” Mr. Shringla said, giving India’s stated position, but without the usual reference to State sponsored terrorism from Pakistan.

Ministry of External Affairs officials have declined to comment on whether the Director General of Military Operations (DGMO) ceasefire announced on February 25, as well as subsequent statements, are part of a larger push for dialogue between India and Pakistan. The two countries have not held formal talks since December 2015, when External Affairs Minister Sushma Swaraj announced a “comprehensive bilateral mechanism” during a visit to Islamabad for the Heart of Asia regional conference on Afghanistan.

The government has not, however, denied several reports claiming that the February ceasefire and joint statement issued by both sides on reducing casualties at the Line of Control were the outcome of a “back-channel” dialogue led by National Security Advisor Ajit Doval and Pakistani officials, including the Army Chief General Qamar Bajwa. A report on the portal Foreign Policy.com also stated that United Arab Emirates officials had facilitated the secret dialogue that allegedly began in October 2020, and a flurry of peace moves are due to follow.

Officials confirmed to The Hindu that External Affairs Minister S. Jaishankar is “likely” to attend the next Heart of Asia regional conference on Afghanistan, part of the “Istanbul Process” that was started in 2011 for 15 countries, including Afghanistan, Azerbaijan, China, India, Iran, Pakistan, Russia, Saudi Arabia, the U.A.E., Turkey, and five central Asian states. Pakistan’s Foreign Minister Shah Mehmood Qureshi has also been invited to the event, due to be held in Tajikistan on March 30.

Meanwhile, Indus Water Commissioners are expected to meet on March 23-24 for their first meeting since August 2018, for annual talks that were derailed due to tensions in ties as well as the COVID-19 pandemic.

The last time a Pakistani sporting team was allowed to visit India was the hockey team in December 2018.