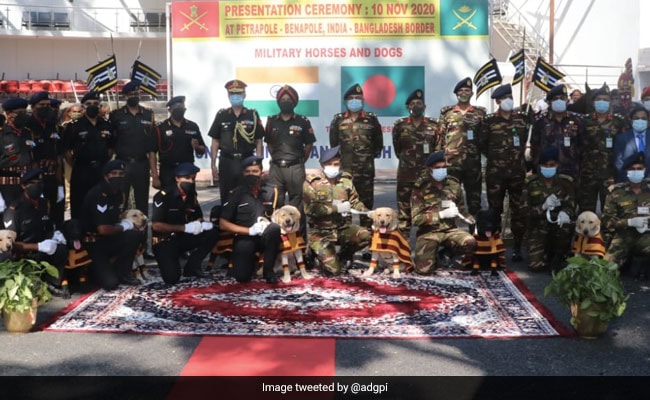 Brigadier JS Cheema from the Indian High Commission in Dhaka was also present at the event.

The Indian Army on Tuesday gifted 20 fully-trained military horses and 10 mine-detection dogs to Bangladesh as part of the country’s efforts to further strengthen bilateral ties.

The equines and canines were trained by the Remount and Veterinary Corps of the Indian Army, according to a statement.

The Bangladesh Army personnel were trained by the Indian Army for handling these specialist dogs and horses.

#IndianArmy gifted 20 military horses and 10 dogs trained on mine detection by Remount and Veterinary Corps #RVC to #BangladeshArmy delegation at Petrapole-Benapole Integrated Check Post on the #India – #Bangladesh Border. #IndiaBangladeshFreindshippic.twitter.com/N9Nt2UGoLB

The presentation ceremony was held at Petrapole-Benapole Integrated Check Post (ICP) on the India-Bangladesh border.

Brigadier JS Cheema from the Indian High Commission in Dhaka was also present at the event.

“The performance of military dogs in the Indian Army has been commendable. We are always ready to extend our assistance to a friendly country like Bangladesh in issues concerning security. When it comes to security, the dogs have proven their mettle. The dogs which have been handed over, are extremely effective in mine detection and contraband items,” a senior Army officer said.

India’s partnership with Peoples Republic of Bangladesh stands out as a role model in the region for good neighbourly relations. With this gesture, the bond which two countries share is expected to grow even stronger, the officer said.