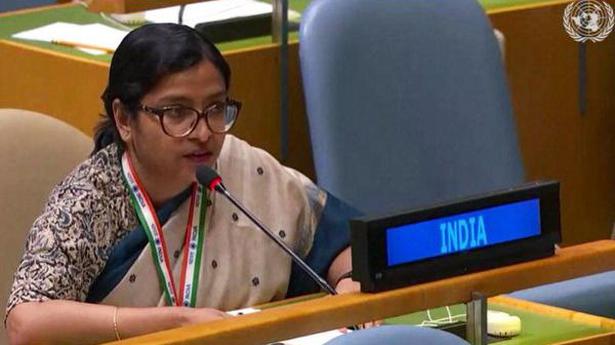 In a significant victory for India at the United Nations, Indian diplomat Vidisha Maitra was elected to the U.N. Advisory Committee on Administrative and Budgetary Questions (ACABQ), a subsidiary organ of the General Assembly.

In the Group of Asia-Pacific States, Ms. Maitra, First Secretary in India’s Permanent Mission to the U.N., obtained 126 votes.

The 193-member General Assembly appoints members of the Advisory Committee. Members are selected on the basis of broad geographical representation, personal qualifications and experience.

Ms. Maitra was one of two nominated candidates from the Group of Asia-Pacific States. In the group, Ali Mohammed Faeq Al-Dabag of Iraq drew 64 votes.

The Fifth Committee of the General Assembly, which deals with administrative and budgetary issues, recommended Ms. Maitra to the Assembly for a three-year term beginning January 1, 2021.

The victory comes as India gets ready to sit in the U.N. Security Council as a non-permanent member for a two-year term beginning January 2021.

India’s Permanent Representative to the U.N. Ambassador T.S. Tirumurti said in a video message that Ms. Maitra was elected on Friday to the U.N. ACABQ “in a strong display of support by U.N. member states“.

He expressed confidence that Ms. Maitra “will bring an independent, objective and much-needed gender-balanced perspective to the functioning of ACABQ“.

Mr. Tirumurti expressed gratitude to all member states who supported India in this “crucial election and reposed faith in our candidate“.

He said ACABQ ensures that fund contributions to the U.N. system are put to good effect and that mandates are properly funded. He noted that India’s membership of ACABQ is particularly relevant now when the U.N. budget has come under increasing pressure.

“India has a stellar record of bringing professional auditing experience to the U.N. and contributing outstanding professionals to U.N. bodies,” he said, adding that with India’s rising obligations in both assessed as well as voluntary contributions to the U.N., “we take the responsibility of administrative and budgetary management of U.N.’s functioning very seriously”.

Mr. Tirumurti emphasised that this assumes greater significance against the backdrop of India’s term in the Security Council for 2021-22.

ACABQ consists of 16 members appointed by the Assembly in their individual capacity.