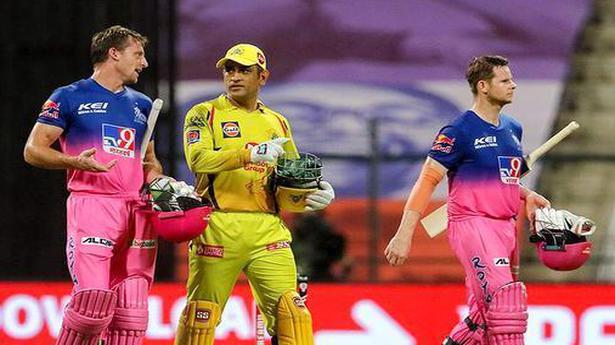 Three-time winners CSK, who have been criticised for continuing with their old warhorses, suffered their seventh defeat in the ongoing IPL.

Chennai Super Kings skipper Mahendra Singh Dhoni on Monday said the youngsters in his squad did not show the spark needed to break into the playing XI at the expense of the veterans.

Three-time winners CSK, who have been criticised for continuing with their old warhorses, suffered their seventh defeat in the ongoing IPL, this time to Rajasthan Royals.

“You don’t want to chop and change. Insecurity is something you don’t want to prevail in the dressing room. Fair enough, this season we weren’t really there,” Dhoni said at the presentation ceremony after suffering the seven-wicket loss.

“Also the youngsters, we didn’t see the spark to push the guys. But what this result has done is give those youngsters a chance in the rest of the tournament.

“Maybe going forward we bring them in and they play without pressure.”

RR restricted CSK to a modest 125 for five after being invited to bowl and then overcame the target in 17.3 overs, thanks to a 98-run fourth wicket partnership between Jos Buttler (70) and skipper Steve Smith (26).

Dhoni said, “There was a bit for the fast bowlers and the reason I brought (Ravindra) Jadeja was to see how much it was stopping and it didn’t as much as the first innings. So I went with the fast bowlers. I don’t think the spinners got as much bite.

“It’s not always supposed to go your way. We have to see if the process was wrong. Result is a by-product of the process, but the fact still remains that if you’re focused on the process then the undue pressure of result doesn’t enter the dressing room.”

RR captain Smith was relieved to have secured a crucial win at an important stage of the tournament.

“The wicket was stopping, wasn’t easy for batting. Strange game but nice to be on the winning side.

“I thought we bowled pretty well in the powerplay and the spinners did a good job in the middle with their leggies and googlies and squeezing,” he said.

“Buttler’s innings took the pressure off me at the other end. It was a really good innings on a wicket that wasn’t the easiest,” Smith added.