With high-end Jordans and Yeezys in their closets, India’s sneakerheads are growing into a community of collectors, flaunting trivia and customised bling

On James Thomas’ vision board for his wedding in April, are the shoes he has always dreamt of wearing: a black and white pair of Jordan 11 ‘Concord’. It took some convincing, but he has coaxed his fiancée into wearing the same pair in all-white, to go with her gown. “Her only condition was that I buy them,” says James, chuckling.

James is the co-founder of Bengaluru-based Sole Culture, a community of high-brand sport shoe enthusiasts or, as they call themselves, sneakerheads. At a recent meetup in Bengaluru, fellow sneakerheads gathered at Hard Rock Cafe to exchange, buy, flaunt and most of all talk about all things sneakers. The event, Sneakers Galore, hosted an auction where three pairs of shoes went under the hammer, selling for up to ₹20,000. “Our eyes first find the shoes, and then the faces,” jokes James.

Quintessentially American, the sneakerhead subculture is finding its way to India through the same inspirations as it did in the US: basketball and hip-hop. Jordans by Nike, Yeezys by Adidas, ASICS, Balenciaga, and New Balance are finding place in Indian closets. These sell in the range of ₹10,000 to ₹30,000; limited edition or custom ones can be priced higher, running up to a lakh.

“I never anticipated this kind of growth in the number of Indian sneaker enthusiasts in the past couple of years,” says 40-year-old Delhiite Atul Sharma. “When I started my blog Sneaker Talk India in 2017, I knew only a handful of sneakerheads,” he says.

The blog, which has now evolved into a community, was Atul’s way of starting a conversation with fellow collectors, discussing the latest drops and reviewing them. “At our first meeting in a coffeehouse in CP, I was expecting maybe five of my friends to turn up. But there were 40 people who did. And now, there are over 10,000 of us,” he says.

Every year, Atul hosts the Kicks Exchange festival for sneakerheads to meet and trade shoes. They have so far met in Delhi, Bengaluru, Kolkata, and Jaipur. Atul, who owns 150 pairs of shoes, buys a pair almost every month.

His 10-year-old daughter already has around eight pairs herself. “I haven’t bought many for her because her feet are still growing. Once she is old enough, I will maybe stop buying for myself and start buying just for her,” he says.

Every shoe has a story

At Sneakers Galore, a special section was dedicated to basketball giant Kobe Bryant, who passed away last year in a helicopter crash.

Sports, and basketball in particular, is a major draw for Indian sneakerheads. Bengaluru-based Nandith Jaisimha recalls the first pair of Adidas — all black sport shoes — that he got when he was 13. Soon, he went on to become a State-level basketball player. When Nandith buys sneakers, he looks for comfort and style, but most importantly, the story behind the shoe.

With a collection of over 100 shoes, that is an omnibus of stories to tell. He has a custom closet built in his bedroom to put a section of his shoes up on display, which he keeps rotating and cleaning every couple of months. The ones he does not use, he passes on to kids in the neighbourhood who play basketball. It is his way of giving back. 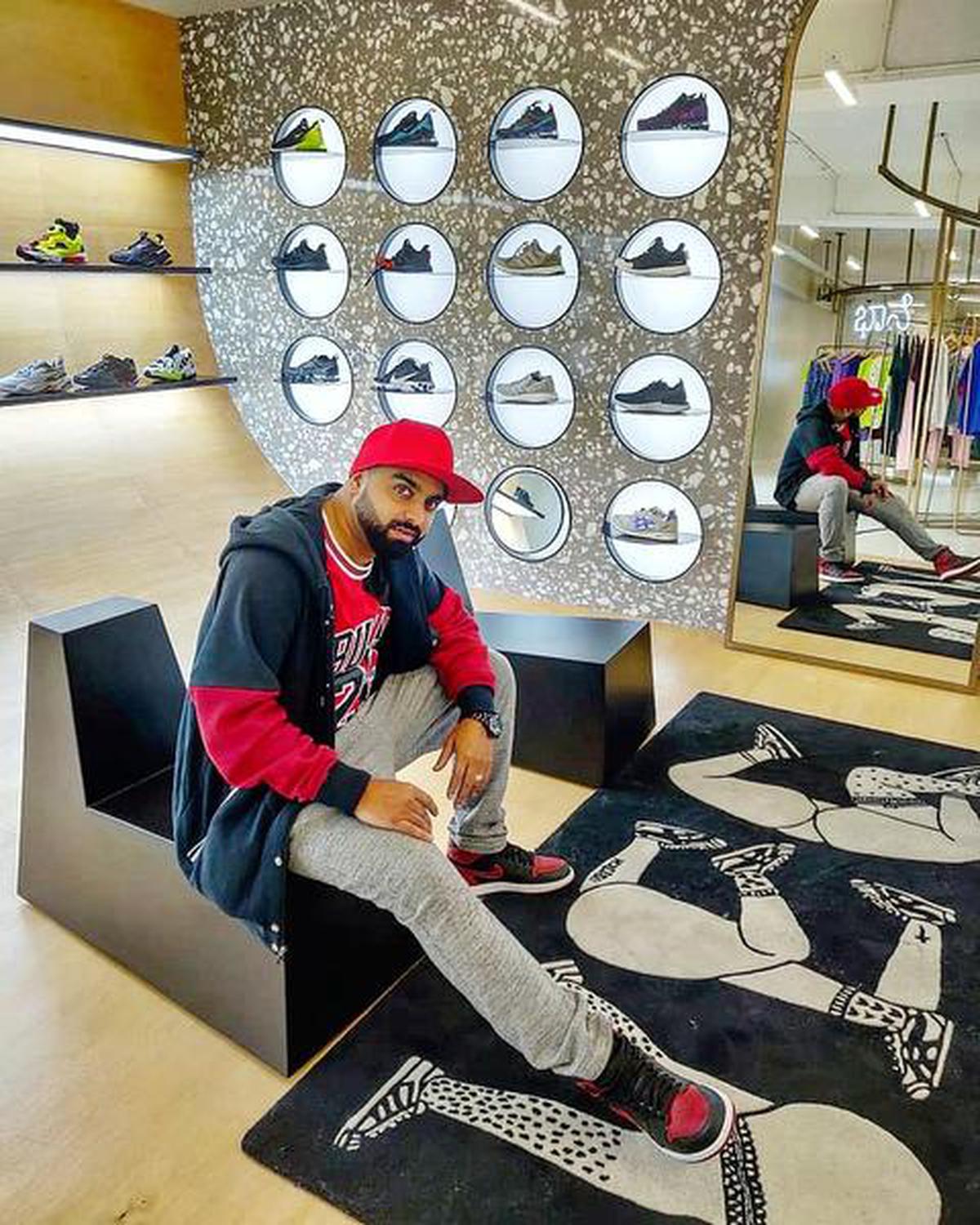 “Take for example, the day Vince Carter, a basketball player from the US who retired last year, dunked over a seven-footer French player Frederic Weis. He was wearing the same model of shoes that I wore yesterday [the Nike Shox BB4],” narrates Nandith, to explain how each of his shoes has a piece of history attached to them.

“Would you call a person an art aficionado only if they collected rare paintings? Sneakers are like that to us; they help us express who we are.” Jaideep Singh, sneaker enthusiast

Over in Hyderabad, his friend and fellow sneaker-head Jaideep Singh agrees with him. Ask his age and the 35-year-old responds, “I was born the year the original Air Jordan 1 was released.”

A passion for sneakers is all you need to qualify as a sneakerhead; you need not be a collector, adds Jaideep. “Would you call a person an art aficionado only if they collected rare paintings? Sneakers are like that to us; they help us express who we are,” says the advocate.

To Jaideep, his sneakers represent the glory days of the 1990s: they stand for Michael Jordan, Shaquille O’Neal, Kobe Bryant. “I am not interested in Yeezys because I didn’t grow up idolising Kanye West,” he says.

But to the younger lot of sneakerheads, the style inspirations come from the Indian music industry. The growth of sneaker culture here is closely related to the boom in regional rap, with rappers and musicians often flaunting customised bling. And here is where India is finding — forgive the pun — its own feet.

Rapper Raftaar’s Pharrell NMD Hu have reflective text ‘Raftaar’ and ‘Kalamkaar’ lit up on each half. They were customised for him by designer Nishant Fogaat, who shuttles between New Delhi and Osaka, Japan.

“Asian countries are the major exporters of fabric for shoemaking. So why don’t we have shoes specific to Indian heritage?” asks Nishant. He has experimented with adding Indian prints like paisleys, folk arts such as warli and sanjhi, as well as Japanese kimono prints, to designer shoes.

A cap made of old shoes designed by Nishant Fogaat

Celebrities, including cricketers (Virat Kohli), actors (Harshvardhan Kapoor) and musicians (Badshah), make up a significant portion of his clients. He works in collaboration with Nike, Puma and other brands; they direct the stars, whom they have signed on, to him for custom makes. His Indian print shoes have also been sold to NBA players such as Marvin Bagley III.

“My clients either get the final customised shoes from me, or buy their own and send them to me for additional work. Sometimes I stitch them from scratch,” says Nishant.

The music industry and celebrities have been Naveen Kumar’s biggest influence; it was after all, a 50-Cent song that inducted him into the culture. At his ECR home in Chennai, the 25-year-old has a budding collection of 17 sneakers, mostly high-tops — used mainly by athletes, these extend above the ankle.

“I really like GV Prakash and Arya’s collections. Arya is a hypebeast for sure. I do hope that one day I can call myself a hypebeast,” he says. Hype culture is where the affluent are dressed head to toe in designer gear — the more limited the edition, the better. It is what is driving the market today.

“I remember the day I got the Nike Black Pigeon for 150 US dollars [less than ₹11k], I posted a picture of them on my social media. The same day, I got a call from a random 16-year-old kid in Delhi, offering me ₹50,000 for it,” says Jaideep, “It’s capitalism on steroids!”

The child, he explains, was a reseller looking to flip and sell shoes at higher than the retail price. Resale accounts such as these have been mushrooming all across social media. Since there are not many options available to buy in India, other than stores such as VegNonVeg and Superkicks and other online platforms, many collectors get their contacts in the US and Europe to get them to India, and re-sell them.

This has set another business in motion: restoration of old shoes. Nishant observes: “A lot of these hype-driven youngsters ask to restore worn out or old shoes, and then sell them for higher prices. That’s why I have to make sure it’s an original product when it comes to me.”

“The resale market right now is a bubble that can burst any time,” believes Nishant, “But even if it does, I hope the passion for shoes among people remains.”