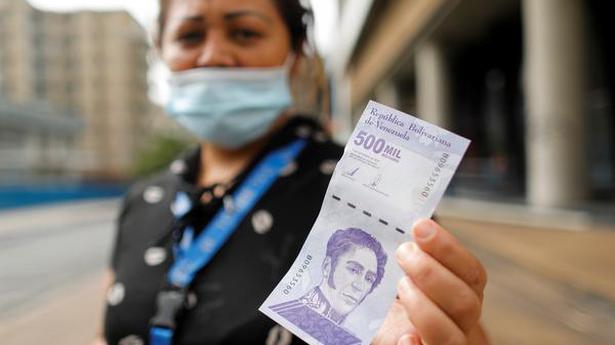 Bills worth 2,00,000 and 5,00,000 bolivars — worth just 10 and 27 U.S. cents, respectively, at the current exchange rate — began to circulate on March 15, according to Reuters witnesses. Venezuela’s central bank said this month it also planned to roll a bill worth 1 million bolivars, just 50 U.S. cents.

The highest-denomination bill had previously been 50,000 bolivars. Annual inflation in the once-prosperous OPEC nation was running at 2,665% in January, contributing to chronic shortages of cash.

“These bills in a few months will not be worth anything any more, because in this country prices rise very quickly,” said Rafael Alvarez, a healthcare worker who left a bank carrying one 2,00,000 bolivar bill and four bills worth 50,000 bolivars each. All that is equivalent to just 20 U.S. cents.

The central bank did not respond to a request for comment.

In addition to the higher-denomination bills, President Nicolas Maduro is seeking to boost digital payments in the face of the cash shortage. While Venezuelans use debit cards for many day-to-day transactions, some services — namely public transit — still only accept cash.

“These new bills will not resolve the cash crisis. They will only pay for transit fare,” said Evelyn Mendoza, a 47-year-old cook, as she waited in a long line to withdraw cash from a bank in the capital, Caracas.