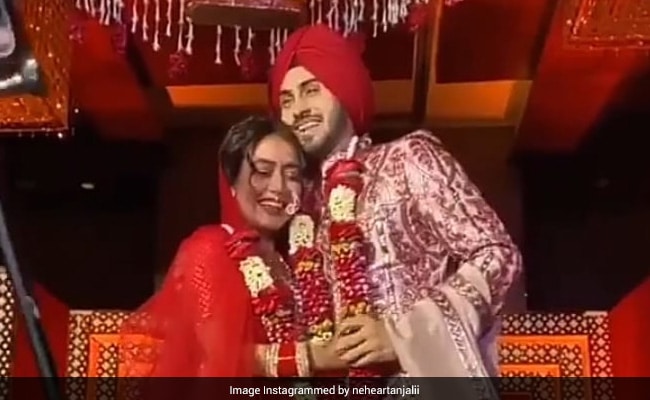 Singers Neha Kakkar and Rohanpreet Singh, after getting married in a traditional Anand Karaj ceremony at a Gurudwara in New Delhi, continued the wedding festivities with a grand ceremony on Saturday night. During the day ceremony, Neha opted for a soft pink lehenga. She wore a red lehenga for the function which took place during late evening. Rohanpreet, who was seen twinning with Neha during the day, later complemented her in a pink and maroon embroidered sherwani. Pictures and video from Neha and Rohanpreet’s big fat wedding surfaced on social media and they are spreading like wild fire. The couple also gave special performances on their big day (more on that later).

Here are all the inside videos from Neha Kakkar and Rohanpreet Singh’s wedding. Take a look, you can thanks us later.

Another video that surfaced on social media and is pretty viral now, in which the newlyweds can be seen dancing together.

Neha Kakkar and Rohanpreet Singh’s recently released song titled Nehu Da Vyah was playing in the backdrop, among other tracks sung by Neha. The newlyweds dedicated songs to each other.

Neha Kakkar made her relationship with Rohanpreet Singh official in October this year, by posting a picture with him and wrote: “You’re mine.” The wedding ceremony was attended by the couple’s close friends and family. The newlyweds will be heading to Punjab for a grand reception after the wedding.

Kamal Haasan’s Party To Fight In 154 Seats In Tamil Nadu, Rest For 2 Allies