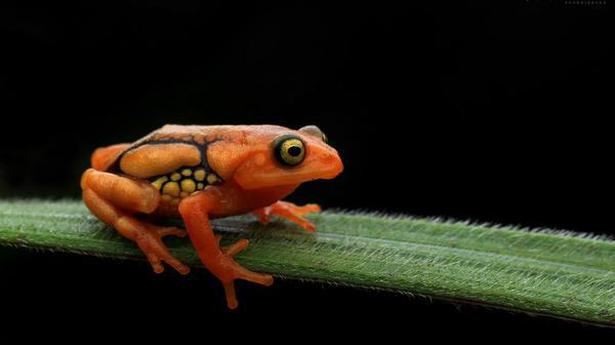 Spotting a tiger in the wild is thrilling. But can you handle herping? Fans of amphibians and reptiles are trekking through forests and rain in search of rare, elusive species

The Raorchestes resplendens or the resplendent shrubfrog lives up to its name. An iridescent blob of colour amid foliage, it is a striking mix of orange and purplish-black. This critically endangered frog found in Anaimudi, the highest peak in the Western Ghats, has an unexpectedly loyal fan following. Every South West Monsoon, as the evergreen forests are drenched in rain, people travel from afar just to catch a glimpse of the resplendens.

Hadlee Renjith, a naturalist and Kerala Tourism guide in Munnar, even named his travel company after the frog – Resplendent Experiences. “It was my dream to find this rare frog in the wild and when I finally got to see one, its beauty struck me,” he says.

The resplendens is not the only star amphibian of the Western Ghats. Other frogs, snakes, lizards and reptiles here have a growing fan base. Herping, the act of watching amphibians and reptiles, has caught on over the past three years, says Hadlee, who has been flooded with enquiries from travellers, especially after the onset of COVID-19.

The growing popularity of macro-photography has spiked interest in herping. Hobby photographers, confined to their homes during the pandemic, have taken to clicking pictures of insects and arachnids up close. For them, a herping tour with a field guide is an exciting prospect.

Reptile and amphibian enthusiasts often go to great lengths just to observe these secretive creatures in their natural habitats.

Sandeep Das from Thrissur has been visiting the Western Ghats every monsoon since 2011 to watch the purple frog, an elusive, endangered species that lives underground. “They come out only once in a year to lay eggs and, therefore we call them the Mahabali (the mythical King of Kerala who lives in the netherworld and visits his people once every year) frogs,” says Sandeep.

A research scholar at the Kerala Forest Research Institute and a research fellow at the Zoological Society of London, Sandeep studies frogs and snakes out of pure passion. “We usually travel to Idukki and the Thrissur Forest Division, around May-June and stay around for a week to watch them come out,” he adds.

The photographs herpers take help in creating awareness about rare species and dispel myths about snakes and amphibians. “People understand that it is not just the bigger animals that make up the wild. These little creatures too are a vital part of the ecosystem,” says Sandeep, who is also a macro-photographer.

Award-winning wildlife photographer R Prakash says there are many undiscovered species of amphibians at every elevation of the Western Ghats, which stretches from Swamithope in Tamil Nadu, up to Songadh town in Gujarat.

“In Valparai alone, there are over 10 varieties of frogs and snakes such as the large-scaled pit viper and Malabar pit viper,” he says. Prakash has camped at Amboli in Maharashtra to photograph the Amboli bushfrog and cicada molting with its purple and blue wings.

Technical architect Uday Hegde based in Bengaluru has travelled to almost all the forests in the Western Ghats and across the North East, to watch frogs and reptiles.

He takes off on weekends, armed with his DSLR camera fitted with a macro lens, and is often accompanied by his herper friends.“We just sit next to these snakes and observe them. Photographing them is one thing, but we are more interested in the creatures than getting the perfect frame. We also try to keep the flashes to a minimum so as not to startle them,” he adds.

Herpers start work by 6 pm, and the outing could last up to 1 am. Experienced herpers know the habitats, behaviour and food habits of the creatures, and where to spot them.

Chennai-based naturalist Yuvan Aves has just completed a virtual urban wilderness walk on his Instagram. An active member of the of Madras Naturalists Society, he took people on a virtual tour of Perungudi Station Road, which was originally a marshland.

“When it rains, dragonflies and damselflies start gathering around puddles and marshes, laying eggs, and patrolling around. Rains are good for moths, frogs and toads, and snakes as they break their dormancy and come out,” says Yuvan, who has recorded over 200 species of moths as a part of year-long study at Adyar Poonga.

Travellers generally have now become a little more appreciative of flora and fauna, says Praveen Muraleedharan, founder of Nectar Experience, a chain of eco-resorts in Kerala. “More people have started to show interest in specific herps,” says Praveen. The resorts at Marayoor, Nilambur, Munnar, Chinnar, Coorg, Wayanad and Thattekkad have naturalists who guide visitors through the rich biodiversity of the region. Praveen’s project, Team Eco Ventures, offers photography tours too, which help those interested in macro photography to find their favourite herps and click them.

The Windermere Estate at Munnar and Riverhouse at Neriyamangalam have a naturalist, who takes visitors on herping tours and macro photography. Situated in a 60-acre coffee and cardamom plantation, the estate offers ample scope for herping.

Though primarily in the leisure spot, Windermere is exploring possibilities in herping and birding as both properties are situated on the Western Ghats and are rich in biodiversity, says Dr Simon John of Windermere.

Conservationist H Byju says such focussed tours eventually pave the way for conservation. “During the pandemic, people are setting out to watch small mammals too, like hedgehogs on the fringes of reserve forests in Satyamangalam and in places such as Ayalur near Madurai. There are exclusive tours to watch Slender lorises in Kallar near Mettupalayam. The experience makes them think about conservation.”

As Yuvan says, watching creepy crawlies is a powerful way to connect with other life forms that live on plants, trees, in little pockets and cracks of cement… all sharing space with us.

(With inputs from K Jeshi)