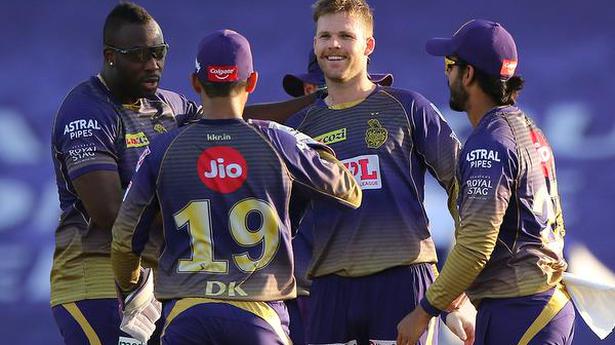 It will be interesting to see how Morgan uses the Kiwi pacer against the likes of De Villiers, RCB skipper Virat Kohli and opener Aaron Finch.

Kolkata Knight Riders have finally found their mojo with the late inclusion of tearaway pacer Lockie Ferguson and they would look to avenge their first leg rout by the star-studded Royal Challengers Bangalore when the two sides clash in the IPL in Abu Dhabi on Wednesday.

It needed KKR nine games, and a change of captaincy, to realise the true potential of the World Cup star pacer for runners-up New Zealand, and when the Eoin Morgan-led side finally brought him in, he blew away Sunrisers Hyderabad with his relentless pace and variations.

Ferguson made all the difference to KKR’s yet another ordinary show, returning with sensational figures of 3/15 (four overs) and 2/2 from three balls in Super-Over.

The imposing bowler, who returned with just two wickets from five games for KKR last season, was on the go from his first ball when he claimed his Kiwi skipper Kane Williamson, brilliantly mixing up his raw pace with slow deliveries to nail the opposition.

It’s a welcome inclusion for the Morgan-led KKR (10 points) who are placed fourth with five matches left and Ferguson will be their key man to take them to the playoffs at a time when their star Aussie recruit Pat Cummins (three wickets from nine matches) is not making much of an impact of late.

AB de Villiers’ incredible assault of 73 not out from 33 balls, which had led to an 82-run defeat not many days ago, will be still fresh in their minds.

It will be interesting to see how Morgan uses Ferguson against the likes of De Villiers, RCB skipper Virat Kohli and opener Aaron Finch.

Ferguson’s inclusion gave the much-needed impetus to the side, but KKR are still struggling with their star all-rounder Andre Russell who capped yet another flop show with the bat.

Their go-to man in the last edition, Russell has just 92 runs from nine matches at an average of 11.50. The opposition bowlers seem to have found out his weakness for short deliveries.

If his abysmal form was not enough, the Jamaican has also picked up some niggles on the field and it would not be a bad ploy to give him a breather.

In spin, it remains to be seen whether they bring in Sunil Narine, whose action has been cleared.

Kuldeep Yadav, who too was included against SRH after being benched for eight matches, looked decent along with their regular spinner Varun Chakravarthy.

RCB, on the other hand, are ahead of KKR by two points and occupy the third place in the table after their seven-wicket win over Rajasthan Royals.

De Villiers has been in ominous form for them and single-handedly won the game with an unbeaten 55 from 22 balls in their 178-run chase against the Royals.

Skipper Virat Kohli will also look to convert his starts as they look to brighten their playoff hopes with a double against KKR.