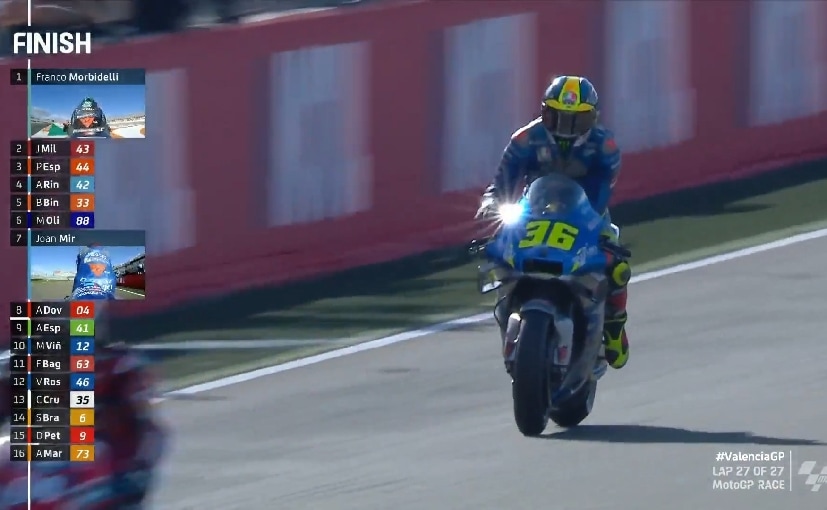 Joan Mir becomes the first rider since 2000 to secure to claim the rider’s title for Suzuki as the Spaniard finished seventh in the 2020 Valencia GP.

In one of the most unpredictable seasons of MotoGP in recent times, Suzuki rider Joan Mir has been crowned the 2020 World Champion, as Franco Morbidelli on the Petronas SRT Yamaha won the Valencia Grand Prix. The SRT rider passed Pramac’s Jack Miller on the final lap to take a dramatic third win of the season. However, it was Mir’s seventh place finish in the race that sealed the title for the rider, ending a 20-year wait for team Suzuki. Incidentally, the landmark achievement also coincides with the company’s centenary year.

The race started Morbidelli on pole but Miller had a better start and secured the lead early on, only to run wide at Turn 1 that allowed Morbidelli to reclaim the lead. Quartararo went off at Turn 2 after missing the braking zone and dropped down the order, which ruined his chances to stay in contention for the title. Mir, on the other hand, was navigating his way at the back and moved up to 10th on the opening lap, while teammate Alex Rins moved up to P7 from 14th. Morbidelli was at his best and started to build the lead over Miller, while KTM rider Pol Espargaro was running third. 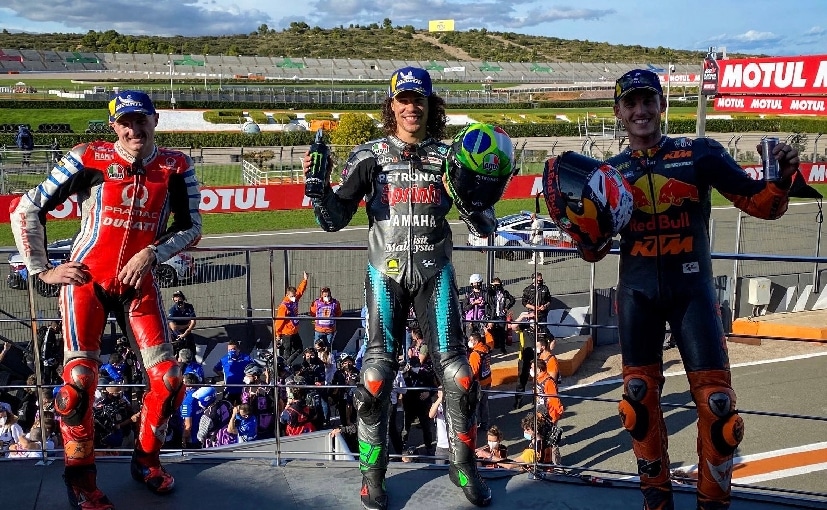 On the podium – Franco Morbidelli, Jack Miller and Pol Espargaro

By Lap 7, the rider had a seven tenths advantage over the Pramac, which increased to 1.2s by Lap 13.  However, Miller wasn’t easing on the pace either and managed to reduce the gap to under a second by Lap 18. With just five laps.left, Miller was now just three tenths of a second behind Morbidelli but the SRT rider was remained dominant and widened the gap to half a second. Miller made a successful attempt on the first corner final lap to pass Morbidelli and seemed to chang to status quo in that moment. However, he ran wide on the following corner that allowed Morbidelli to reclaim the lead once again and cross the chequered flag by a gap of just 0.093s. Espargaro was a distant third over 3s off the race leader.

Coming in at P4 was Rins, followed by Brad Binder on the KTM Miguel Oliviera on the Tech 3 KTM. Mir managed to bag P7 enough to secure the title. The Spaniard also becomes the first rider to win the crown in Moto3 and the premier class. Andrea Dovizioso on the factory Ducati finished behind Mir, while Aprilia rider Aleix Espargaro and Yamaha’s Maverick Vinales rounded off the top ten.

Francesco Bagnaia managed to take points on the Pramac at P11, while Yamaha rider Valentino Rossi took P12 ahead of LCR’s Cal Crutchlow and Stefan Bradl on the factory Honda. The final point was taken by Danilo Petrucci on the Ducati.

The Valencia GP had a few crashes that included LCR’s Takaaki Nakagami, while Johann Zarco crashed early on Lap 6 falling off his Avintia Ducati.