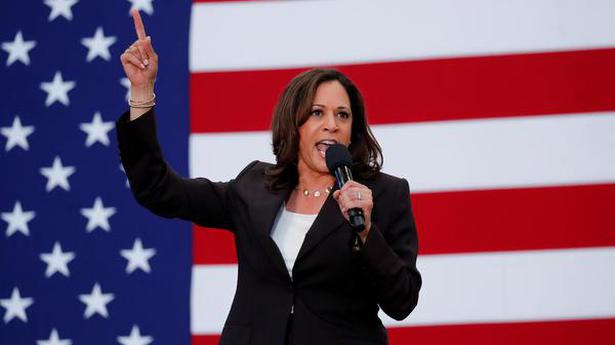 Next year, let’s celebrate with some ice cream at the White House, tweeted the Democratic presidential nominee

Democratic vice presidential candidate Kamala Harris turned 56 on Tuesday, with the party’s presidential nominee Joe Biden greeting her on the big day, saying they would celebrate her next birthday at the White House.

“Happy Birthday, Kamala Harris. Next year, let’s celebrate with some ice cream at the White House,” tweeted Mr. Biden, who had in August picked her as his running mate.

If elected, she would be first-ever woman vice president of the United States. Mr. Biden will celebrate his 78th birthday next month.

Watch | Who is Kamala Harris?

Ms. Harris in a tweet said her birthday wish is that everybody should go out and vote. “My birthday wish this year? For everyone to go vote,” she said.

October 20 also happens to be the birthday of her niece, Meena Harris. “I couldn’t let the day go by without wishing my niece, Meena, a happy birthday too! she said.

Former Secretary of State Hillary Clinton greeted Kamala Harris on her birthday. “In two weeks, we could call this birthday girl Madam Vice President,” said Clinton, the 2016 Democratic presidential candidate as she asked people to go out and vote.

Also read: Kamala Harris | A woman with many firsts to her name

“Happy bday to @KamalaHarris. ! Celebrate this big day by voting for the #BidenHarris ticket and Democrats up and down the ballot,” said Sabrina Singh, the Democratic vice presidential nominee’s spokesperson.

“Happy birthday, @KamalaHarris! Hope you’re showered with love on your special day,” tweeted former First Lady Michelle Obama. “The best way to celebrate Kamala is by making sure you’re registered and have a plan to vote at http://iwillvote.com. And once you do, share how you’re voting with us! she said.

“Joe and I are so proud of the fact that we have built one of the broadest coalitions that we have ever seen, bringing together of course Democrats and independents and Republicans, bringing together leaders across the spectrum including, I have to say the great Cindy McCain, and so many others who are standing up saying. ‘look, we got to fight for our country,” Harris said in her remarks during the virtual fund raiser.

Ms. Harris also participated in a virtual Milwaukee rally to kick off the first day of in-person early voting in Wisconsin.

Husband Doug Emhoff sent her birthday wish on Instagram. “Blind date, love at first sight, marriage, family, and an incredible life together. Through it all, no matter what, she is ALWAYS there for me and our family without hesitation. Happy Birthday to my amazing wife @kamalaharris!”

“And her birthday wish…VOTE EARLY!” Emhoff also reminded people of her wife’s wish.

US condemns terrorists who seek to infiltrate across LoC